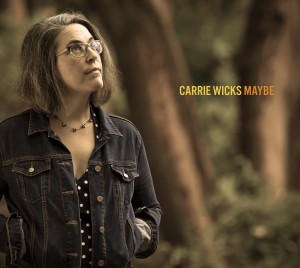 ...a skilled vocalist, top-notch in her phrasing and intonation, but she also possesses an ineffable 'something extra' that's both compelling and engaging in its delivery of the stories she has to tell.
All About Jazz

"The lyricism within 'Maybe' provides listeners with a form of storytelling unlike any other. There is a palpable sense of maturity found in Wicks' writing, one that teeters between states of pensiveness and supreme delectation." Earshot Jazz

Earshot Jazz (Connor Creighton)
Seattle vocalist Carrie Wicks has presented an album that leads the mind to wander and fall into deep tonal seduction. The lyricism within Maybe provides listeners with a form of storytelling unlike any other. There is a palpable sense of maturity found in Wicks' writing, one that teeters between states of pensiveness and supreme delectation. The o ...

Midwest Record (Chris Spector)
Ever wonder who was the mook that decided shoe gaze was a good thing for a genre? Probably some mook who grew up in a house where jazz thrushes singing about how much life sucked was the soundtrack for the story of his life. Wicks does the thrush/cabaret thing without a touch of the tortured artist effect that goes with the genre all too often. ...

All About Jazz (C. Michael Bailey)
Vocalist Carrie Wicks is three albums into her recording career with the release of Maybe, a collection heavy on smartly composed and sung originals. Wicks has previously released I'll Get Around to It (OA2 Records, 2010) and Barely There (OA2 Records, 2012). She enjoyed the same rhythm section so much on both recordings, pianist Bill Anschell, ba ...

AXS (Carol Banks Weber)
In a city with so many jazz singers, Carrie Wicks somehow manages to stand out. Seattle's Wicks doesn't do a whole lot of gigs or albums. But what she does is concentrated and sure, a heady mix of unorthodox, intelligently chosen covers and deeply wrought originals - wrapped in an unlikely package of quiet solitude. That is, until she steps up to t ...

KUCI, Irvine, CA (Hobart Taylor)
The original tunes on this disc are all revelations. Written by Wicks and the web elusive Ken Nottingham, (is he the Seattle Bluegrass musician?), the songs display musical and lyrical sophistication of the highest order. If you attached a name like Bacharach or Richard Rodgers to them you would not be surprised. I don't believe this is hyperbole. ...

Improvijazzation (Rotcod Zzaj)
It's amazing (to me, anyway) that there are so many splendid artists so near to me (Carrie is based in Seattle, only a few miles from my abode)… her vocal work on this October 2015 release is full of life and the joy of living it! After listening to her sweet & loose vocal on the haunting "Desolation Moon", it's clear that I need to carve some t ...

Amazon (J. Gage)
There is an old interview with Luciano Pavarotti where he compares preparing his voice and lungs for a performance to a Ferrari just before a race - just the right blend of air and energy must be harnessed for the performance to reach its apex, for the car to win the race. I would argue that, in the case of race car drivers, Pavarotti and all great ...