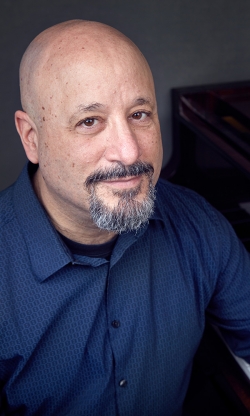 He's an unsung hero of the understatement. A lavation, a magic, a mystery and totally original. He'll play the same song different ways, every time, even if it's his own. You want an original take on the new and old, then this is your message of the year.
-Dick Crockett, The Voice, 88.7, Sacramento

Seattle native Bill Anschell returned to the Emerald City in 2002 after spending 25 years studying, composing, and performing across the country and around the world.

After leading the life of a jazz vagabond for several years, Anschell settled in Atlanta in 1989. He was initially drawn there by the opportunity to serve as Jazz Coordinator for the Southern Arts Federation (SAF), the regional arts agency of the South. Firing up SAF's jazz program virtually from scratch, Anschell launched a quarterly newsletter, established a regional jazz database, ran an annual jazz conference, published a book on grantswriting for jazz artists and organizations, and created "JazzSouth," an internationally syndicated radio program. At night he dove headlong into the city's thriving jazz scene, working as a sideman with various groups and leading his own trio.

By 1992, Anschell's performing itinerary had grown to the point where it demanded his full attention. He left the SAF post, continuing to produce "JazzSouth" out of his home while focusing on playing and composing. Over the next ten years, Anschell ascended the jazz ranks in Atlanta, leading his trio at major festivals and becoming a first-call accompanist for visiting jazz greats. His trio's performing highlights included the 1996 Summer Olympic Games, the Atlanta Jazz Festival, Piccolo Spoleto, the Montreux Atlanta Festival and four extensive tours of South America.

During the same period, Anschell enjoyed a lengthy association with vocalist Nnenna Freelon, serving as her pianist, arranger, composer, and musical director. Among their many performing highlights were the North Sea Jazz Festival in Holland, the Monterrey Jazz Festival in California, the Kennedy Center in Washington, and six European tours. Their concerts were broadcast on Radio France; French national television; and National Public Radio's "JazzSet." Anschell made guest appearances as pianist and composer on two of Freelon's early Columbia Records releases. He was featured as pianist and arranger throughout her 1996 Concord release Shaking Free, which was nominated for a Grammy as the year's best jazz vocal recording.

Anschell has played and/or recorded with a host of jazz greats including Richard Davis, Ron Carter, Benny Golsen and Russell Malone. In 2001, he was selected by the American Composers Forum for its "Composer-in-the-Schools" program; his residency included a commissioned piece for chamber orchestra. The same year, his piano work was featured in the soundtrack of the PBS movie, "Old Settler." Since 2003, Anschell's original compositions have received widespread cable and network exposure, appearing on programs including NBC's "The West Wing" and HBO's acclaimed series "The Wire."

Most recently, Anschell received a Golden Ear Award as the "Best Northwest Jazz Instrumentalist of 2005." Golden Ears are administered by Earshot Jazz based on open voting by the Seattle jazz community.