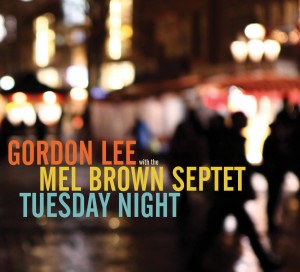 ...Lee's own inventive, often virtuosic, improvisations are uniquely his own...
- Cadence

Since 1998, pianist Gordon Lee has been a mainstay with drummer Mel Brown's hard-swinging sextet as they've played to packed rooms every Tuesday Night at Jimmy Mak's in downtown Portland. Known for its adherence to the "hard bop" sounds of Art Blakey, Horace Silver and Wayne Shorter, Lee's compositions follow in that style, but with new 21st-century twists. His first recording with the band, "Gordon Bleu," led to them winning the 1989 Hennessy Jazz Search, where they beat out 700 other groups from around the world. "Tuesday Night" is the long-overdue second recording of this inspired, soulful band and a tribute to the enduring legacy of drummer & bandleader, Mel Brown.

Midwest Record (Chris Spector)
The Portland OR jazz scenesters may not record very often, but when they do, they know how to shake it up. Last time around, 25 years ago, they beat all comers for a Hennessey jazz search prize top prize. Since then, they've been lighting up the Portland night with some hot, modern post bop that fills the joint and keeps them coming back for more. ...

Wondering Sound (Dave Sumner)
The album's title refers to the weekly show this septet has been performing at Portland's Jimmy Mak's club since 1998, and the music displays both the chemistry developed over that time as well as the vivid energy of being there for the performance. Music that embraces the hard bop spirit of Art Blakey's Jazz Messengers even during those moment ...

Music Life & Times (Travis Rogers, Jr.)
Finally, Gordon Lee with the Mel Brown Septet has released the long-awaited sequel to "Gordon Blues," the 1989 sextet recording of the group who won Hennessy Jazz Search competition. In the end, 25 years was not too long to wait for such a splendid recording. For well 15 years, Portland's Jazz audience has enjoyed Mel Brown's Septet every Tuesda ...

Jazz Weekly (George W. Harris)
I bet you didn't know that Portland Oregon has a cooking jazz scene. They even have an annual festival, rain or shine! Here, you've got local hero Gordon Lee on piano along with drummer Mel Brown's band of Derek Sims/tp, Renato Caranto/ts, John Nastos/as, Stan Bock/tb and Andre St. James/b sizzling through Lee's material that has a hard bop heart ...

Jazz Society of Oregon (Geoge Fendel)
Where there was once bristling, beautiful hard bop, there is now Tylenol, toys and towels; what was once a favorite jazz hang called the Hobbit, is now a Walgreen's. But many remember those nights on SE 39th & Holgate. Among the stars on that stage were Mel Brown, Thara Memory, Warren Rand, Michael York, Tim Gilson and Gordon Lee. Well, most of th ...

Cadence (Bill Donaldson)
The fact that Mel Brown's septet has gone unrecorded, but for an album in the eighties, raises the question of how many other not only worthy, but individually remarkable, groups remain undiscovered. Their members may be satisfied with performing as the occasions arise at local venues before going back to make a living at their day jobs. In Bro ...