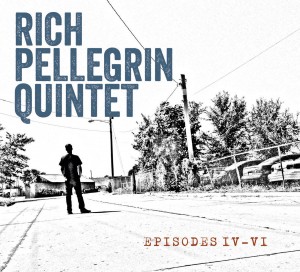 Pellegrin seems to have multiple influences, displaying at times the density and drive of pianist McCoy Tyner, elsewhere sounding free and unpredictable, like no one but himself.
- All About Jazz

Inspired by a yearlong journey through Europe and North Africa, Seattle pianist Rich Pellegrin's debut record, Three-Part Odyssey, was released in 2011. All About Jazz praised it as being "remarkably original" and a "superb debut." For this second volume of the trilogy, Pellegrin utilizes subtle backbeats and repetitive structures to lay a foundation for his band's hallmark collective sound, creating an album that is a seamless blend of mainstream and avant-garde aesthetic sensibilities.

Midwest Record (Chris Spector)
The second part of the piano man's trilogy about his travels through Europe finds his jazz culled from somewhere in the Impulse '60s when the sides were either way crazy or way laid back. Taking the laid back approach inspired by a non jet age world beat world view built more on mystery than mysteries of the far east, this is first class sitting ...

Columbia Daily Tribune (Aarik Danielsen)
Rich Pellegrin and his artful quintet made a promise in 2011. It came in the form of Three-Part Odyssey, the debut album from the pianist, also a University of Missouri professor, and his partners in jazz. Daring and possessed of many moods, it certainly could have existed as a complete, self-contained musical statement. But Pellegrin and his ...

KUCI.org (Hobart Taylor)
University of Missouri prof. Pellegrin's second album is a masterwork. The pianist is joined by an extraordinary cadre of musicians, especially tenor player Neil Welch in a Coltrane like exploration of ascending enlightenment. Basically these compositions are meditations on scales....American ragas. This record will certainly make my top 10. ...

Bop-N-Jazz (Brent Black)
As strong and inventive as any quintet you will hear! A quintet that actually functions and communicates as a working band, what a novel idea. With the exception of Tom Harrell's band it is indeed amazing it only took about forty years to reinvent the wheel by actually including the entire band in the compositional approach. This is the key t ...

Earshot Jazz (Andrew Luthringer)
Pianist and composer Rich Pellegrin is a somewhat musically elusive figure. During an initial listen to his new album, Episodes IV-VI, I found myself rummaging for reference points, trying to get a handle on how to describe and process his strikingly original music. Episodes IV-VI can be described with the increasingly ineffective label of "jazz, ...

All About Jazz (Dan McClenaghan)
(****) Pianist Richard Pellegrin offered up his first installment of Three Part Odyssey (OA2 Records) in 2011. It's a musical journey inspired by travels through Europe and North Africa. Employing a superb quintet, three "Episodes" blossomed from a first-rate collective approach. Pellegrin and his group follow this up with Episodes IV-VI, featur ...

Jazz Weekly (George W. Harris)
Pianist Rich Pellegrin leads a flexible band of R. Scott Morning/tp, Neil Welch/ts, Evan Flory-Barnes/b and Chris Icasiano/dr through the second volume of a "Three Part Odyssey" trilogy. Two of the tree "Episodes" have two parts, which means they have similar themes produced by the rhythm team, but the horns take them into different directions. "I ...

LA Jazz Scene (Scott Yanow)
Pianist Rich Pellegin contributed all of the music to Episodes IV-VI, the second volume in his three-part odyssey trilogy. The five pieces on this CD are excellent showcases for his quintet (trumpeter R. Scott Morning, tenor-saxophonist Neil Welch, bassist Evan Flory-Barnes and drummer Chris Icasiano) as soloists and in loose but very coherent ense ...