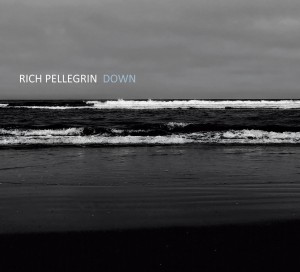 For his third OA2 recording, composer/pianist Rich Pellegrin presents his decade-old quintet performing five enigmatic compositions - from the raw intensity of "Trial" to the mystical, inscrutable hues of the title cut, "Down" - along with an extended alternate version of "Down," recorded with a contemporary classical ensemble at the University of Missouri - the Mizzou New Music Ensemble. Together, eleven diverse musicians create a radiant texture of interweaving lines, extending the vital, collaborative focus for which the band is already known.

Columbia Daily Tribune (Aarik Danielsen )
The final scene before a film fades to black. The last line of a novel's dialogue. The stanza which ends a poem. Often, the end of an artwork sheds new light on everything which came before it. Last lines, final scenes, musical codas act as translators, bringing context and clarity. Everything, as novelist Jonathan Safran Foer put it, is illumin ...

The Answer is in the Beat - WCBN, Ann Arbor (Paul Simpson)
Rich Pellegrin's third album for OA2 features the brilliant Seattle duo Bad Luck as well as the Mizzou New Music Ensemble (on the alternate version of the album's title track). Opening piece "Trial" is an instant attention-grabber, filled with complex, stop-on-a-dime arrangements and an overabundant amount of energy. Absolutely fresh and exciting. ...

All About Jazz (Dan McClenaghan)
In an All About Jazz review of pianist/bandleader Richard Pellegrin's Episodes IV-V (OA2 Records, 2015), the author states that Pellegrin's style lies "somewhere in the middle of the spectrum between jazz and 21st century classical music." That also holds true with Down, the third quintet offering from the Assistant Professor at Florida State Unive ...

Downbeat (Robert Ham)
The heart of Rich Pellegrin's new album is its title track. The pianist hands the music over first to just his regular ensemble, a limber quintet that caresses the smooth curves and supple give of the tune's wintry melody. They interrupt the flow of the song with a gentle rudeness; tenor saxophonist Neil Welch playing with percussive plosives and d ...

Jazzenzo (Netherlands) (Georges Tonla Briquet)
With his previous CDs ‘Three-Part Odyssey' and ‘Episodes IV-VI', American pianist Rich Pellegrin proved to have a lot to offer. ‘Down' is the confirmation of all that good. Within the ranks tenor saxophonist Neil Welch and drummer Chris Icasiano, known from Bad Luck. ‘Down' starts with ‘Trial', a toboggan ride in which both horn playe ...

Earshot Jazz (Ian Gwin)
With a background in drums and percussion, pianist and composer Rich Pellegrin's strong ear for rhythmic sonority has guided his previous releases, Three-Part Odyssey (2010) and Episodes IV-VI (2011). His approach to improvised music takes in the harmonic extrapolations of McCoy Tyner and the jocular symphonism of leaders like Gil Evans. For his ...

Jazz Convention (Italy) (Nicola Barin )
The strength and inventiveness of pianist and educator Rich Pellegrin’s new project are concealed in his music’s natural inclination toward melody. The tried and tested quintet moves with agility and cohesion. Seven tracks written by the American pianist testify to the percussive approach to the keyboard and the attention paid to the totality ...

Jazz Weekly (George Harris)
Pianist Rich Pellegrin creates a wide swath of post bop moods on this album with a core team of R. Scott Morning/tp, Neil Welch/ts, Evan Flory-Barnes/b, Chirs Icasiano/dr and a guest ensemble. The core team is able to peel off some impressive intricate bop work on the tricky "Trial" and give a nice bluesy feel to a Maiden Voyage-ish "Birthright." W ...