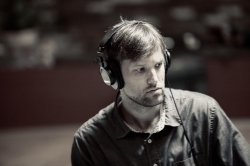 Through it all, Pellegrin does as the great pianists do...diving forward to take solos that are by turns florid and cracked, balletic and modern
Downbeat Magazine

Rich Pellegrin began playing piano at the age of five, but spent his teenage years preoccupied with drums and percussion. He pursued a diversity of musical endeavors before discovering the beautiful creative process of jazz and improvised music. His playing is noted for its intensity, conviction, directness of expression, and percussive yet sonorous tone quality.

Pellegrin's debut record, Three-Part Odyssey, was released on OA2 Records in 2011, and featured some of the most exciting and forward-looking musicians of Seattle's younger generation. His second record, Episodes IV-VI, has been called "strikingly original" by Earshot Jazz Magazine, "first class" by Midwest Record, and "a masterwork" by KUCI 88.9 FM (Irvine, CA). Both albums have received significant national and international airplay. His third record, Down, was released in February of 2019.

Having taught previously at the University of Washington and the University of Missouri, Pellegrin is currently on the faculty of the University of Florida. In 2014, Pellegrin produced the Mizzou Improvisation Project, an interdisciplinary festival bringing together a wide range of scholars, performers, educators, improvisers, and composers. The festival included a collaborative recording session with Pellegrin's Seattle-based band and the Mizzou New Music Ensemble, material from which was released on his album, Down.