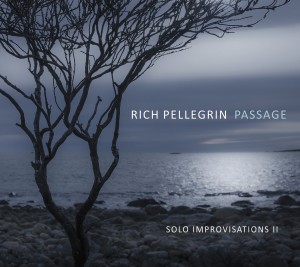 Magical and elusive...Pellegrin's imagination never flags...This is music I'll be returning to both for deep listening and for inspiration.
Jazz'halo (Belgium)

Recorded at Whidbey Island's charming Langley Methodist Church, near Seattle, pianist Rich Pellegrin captures the spirit of place in these times, exploring the wide-open spaces of the mind and reconnecting with water, mountains and forest. Selected from the same vault of recordings as 2021's Solitude, Passage offers a moody, contemplative spirit as it follows an evocative narrative structure, taking the listener on a cinematic journey through their own imagination. The piano itself, a relic with its own idiosyncrasies and character, is another personality in the performance as its creaks and exhortations suggest paths for the performance to wander. Through these two volumes, an accomplished musical mind with far-reaching intentions offers the freedom to just "be."

All About Jazz (Dan McClenaghan)
4-Stars In the summer of 2019, pianist Rich Pellegrin retreated to Whidbey Island, Washington, near Seattle. On the island, in the fellowship hall of the Langley United Methodist Church, lies an Everett Concert Grand Piano, from 1915. It is an aging and perhaps imperfect instrument, but one with a certain character which compelled Pellegrin to set ...

The Answer is in the Beat (Paul Simpson)
Passage is a second volume of piano improvisations recorded in a church near Seattle during the same time period as Pellegrin's Solitude from last year. Here, the tracks are arranged into three sets so that there's some sort of vaguely cinematic arc to them, though no explanation or suggestion is provided as to what the story could be, and it's ent ...

Midwest Record (Chris Spector)
It might have been recorded in Seattle but this set of improvs from the same session as an earlier volume is loaded with that ECM/miniature sensibility that just screams Eurocentric. Seeming to be a vortex of Jarrett, new age and classical, this solo piano set is a boon for the high minded, but you don't have to be an egghead to get it, just someo ...

All About Jazz (Jane Kozhevnikova)
Passage is an improvised piano album by Rich Pellegrin, a continuation of his solo album Solitude (OA2, 2022). Both Solitude and Passage were recorded during the same sessions in summer 2019 at Langley Methodist Church (Langley, WA). After multiple releases from Pellegrin's quintet, these two solo albums stand out as an intimate and vulnerable expl ...

Jazz'halo (Belgium) (Stephen Godsall)
This is Rich Pellegrin's second album of solo free improvisations; "Solitude" was one of my favourite releases of 2021. Pellegrin is a pianist, composer, writer and professor of music at the University of Florida. His previous recordings include albums with his Seattle based quartet, playing his own material. He has published writings on Thelonious ...

Take Effect (Tom Haugen)
The esteemed pianist Rich Pellegrin recorded this batch of tunes at the Whidbey Island's Langley Methodist Church, and he certainly embraces the aura of the setting where he connects with water, mountains and forest across these solo pieces. Set One leads with 9 warm, graceful segments that lay the foundation for a very reflective mood, as much ...

Earshot Jazz (M.V. Smith)
Pianist Rich Pellegrin, who attended graduate school at the University of Washington, is currently an assistant professor of music theory at the University of Florida. He has published extensive scholarship on such artists as Thelonious Monk, Robert Glasper, and Bill Evans and released five albums on Origin Records' OA2 imprint, his band featuring ...