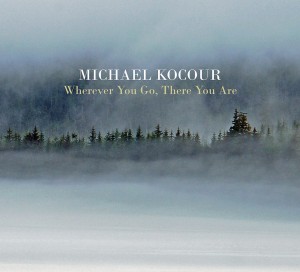 ...one of the most sophisticated pianists in jazz.
- Howard Reich, The Chicago Tribune

On "Wherever You Go, There You Are," pianist and composer Michael Kocour offers a kind of casual mastery and urbane carriage that makes the demanding solo piano idiom sound as natural as breathing. His models are Hank Jones, Tommy Flanagan, Cedar Walton and Barry Harris. Kocour has internalized their values--storytelling, melodic integrity, refined harmony and voice leading, spontaneous orchestration and swing--without sounding like a clone of any of them. Originally from Chicago and a regular sideman with James Moody & Benny Golson, Kocour has been director of jazz studies at Arizona State University for the last decade. (Mark Stryker)

Reviews of Wherever You Go, There You Are

All About Jazz (Mark Sullivan)
For this solo piano project Kocour chose to emphasize standards. But it's neither a straightforward mainstream program, nor an aggressively experimental one. Kocour is a brilliant technician, but he never uses technique to show off - only to tell a story. Dizzy Gillespie's "Con Alma" opens the set, with so much independence between the hands th ...

All About Jazz (David A. Orthmann)
Wherever You Go, There You Are, Michael Kocour's energetic, deeply focused, imaginatively performed solo recital, is a patchwork of eight, twentieth-century jazz and popular songs, as well as two of the pianist's original compositions. On the one hand, Kocour is clearly cognizant of the original intent and the performance history of material rang ...

Midwest Record (Chris Spector)
The piano man goes fully front and center this time out putting his name out front and his piano in the spotlight. Influenced by greats like Hank Jones and Tommy Flanagan and a sidekick to golden oldies like James Moody and Benny Golson, Professor Kocour is no manqué when it comes to kicking it out old school in high style. Tackling a set of mos ...

All About Jazz (C. Michael Bailey)
4-STARS Solo piano recitals have a refreshing quality about them. The instrument's and by proxy, the performer's, thoughts are undiluted and benefit from the lack of competition with other voices. Pianist, composer, and educator Michael Kocour offers a collection of standards and originals that provide a case-in-point. In an even ten selections, ...

All About Jazz (Jack Bowers)
4-STARS Wherever You Go, There You Are is akin to visiting pianist Michael Kocour's living room or den for an hour or so and lingering while he entertains you with his singular takes on a number of favorite songs, most of which you've probably heard before but seldom played as well as this. Kocour's lyrical style has a way of drawing one's ear ...

Jazz Society of Oregon (George Fendel)
You probably haven't agonized over this, but solo piano recordings nowadays are nearly as rare as the Mariners in the playoffs. So not only was I surprised to see such an item, I took a look at the tune list and said, "Wow." Michael Kocour is not a rookie in the jazz biz. He's originally from Chicago, where he spent years working with no less a bop ...

Jazz Weekly (George W. Harris)
A solo piano album truly digs deep into the heart and soul of an artist; judging by this release, Michael Kocour has the heart of a lion. He plays both acoustic and Rhodes piano here and mixes them up with standards and his own compositions in a tasty way. He's got a clean and clear touch with a warm sense of swing, as he displays on a patient "Con ...

WTJU - Richmond (Dave Rogers)
Pianist Michael Kocour played with the late saxophonist James Moody for the last decade of his life and was profoundly influenced by his musical and philosophical insights. He also cites the words of pianist Mulgrew Miller as the anchor for his own musical belief: "…jazz is both a progressive art and a folk art…moving the music forward or estab ...

Oregon Jazz Scene (George Fendel)
Pianist Michael Kocour spent about two years working with the late legendary saxophonist James Moody. That alone on a resume would be enough to raise the eyebrows of any jazz fan in-the-know. So, why the heck have I not heard from him on his own until now? Go figure, but on this solo effort, he is the picture of lyricism, graceful touch, and (when ...

Improvijazzation Nation (Rotcod Zzaj)
I can tell you, after listening to only the first 8 bars (or so) of Michael's marvelous piano playing - he's one of the best talents on the scene today! I absolutely loved his Rhodes work on "Pensativa", and have no doubt you will as well. His style is "all natural", with no pretense or high-powered electrical gimmickry, and that in itself makes ... 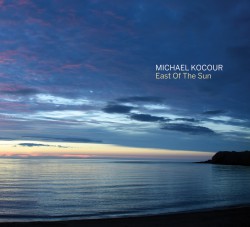