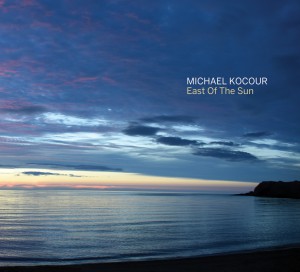 Mike Kocour's careful yet fearless choice of notes and intervals come from the deepest grotto of his heart...a breath of fresh air in an asphyxiating world. Listen to him - as I do.
BENNY GOLSON

Pianist Michael Kocour brings many gifts to this solo piano recording of gems from the Great American Songbook: melodic creativity, harmonic acuity, swinging rhythmic gait, supple technique, an elegant touch, and bell-like tone, ebullient spirit and refined taste. But lording over all these qualities is this meta truth: Kocour is a compelling storyteller whose playing reaches across the footlights, pulling listeners inside the music where magic happens on the fly. Each improvisation here reveals the cohesive scaffolding and clarity of a tightly constructed short story - while the natural flow of Kocour's phrasing contains myriad unexpected details that suggest subtle plot twists. Blink and you'll miss them.

Reviews of East of the Sun

All About Jazz (Dan Bilawsky)
The ease of expression with which pianist Michael Kocour unspools standards tends to belie the greatness of his playing. With extreme comfort and control he lays out one beautiful performance after another, all the while presenting a fine balance between technical accomplishment and creative bent. East Of The Sun—the sixth leader (or co-leade ...

All About Jazz (David A. Orthmann)
4-STARS Michael Kocour's solo piano recital is comprised of great American songs, most of which were popular in the early-to-mid twentieth century. There's nothing dated or anachronistic about the ways in which he handles the material. Throughout the record's ten tracks, Kocour establishes a state of equilibrium between a fealty to traditional son ...

Downbeat (Ed Enright)
Pianist Michael Kocour brings formidable technique and exquisite touch to 10 Great American Songbook standards on East Of The Sun, his third solo outing. Performed on a refurbished 1975 Steinway model B grand in a small studio with no added reverb, the album has an intimate, straightforward vibe that recalls classic solo piano recordings by the ...

WTJU (Dave Rogers)
Michael Kocour is an Associate Professor and the Director of Jazz Studies at Arizona State University in Tempe, Arizona. Hailed by the Chicago Tribune as "one of the most sophisticated pianists in jazz," Kocour has performed at venues around the world and has been a guest on Marian McPartland's internationally syndicated NPR program "Piano Jazz." A ...

Midwest Record (Chris Spector)
There's an army of saloon piano players out there that are perfectly enjoyable, but Kocour is one of those one in a hundred kind of players ala Dave McKenna that just makes you go ‘man, what are you doing here?' if you should happen to stumble upon him by accident. A solo piano set of standards from jazz, pop and country---this is just one of tho ...

Chicago Jazz Magazine (Hrayr Attarian)
The stimulating and delightful East of the Sun is pianist Michael Kocour's second solo release. On it the masterful improviser delves deep into the Great American Songbook with elegance, intelligence, and vibrant spontaneity. Kocour also expresses influences from across the instrument's history in jazz as he deftly deconstructs and reinterprets the ...

Jazz Weekly (George W Harris)
Pianist Michael Kocour goes solo on this rich and classy collection wide ranging standards. His touch is clean, but his approach is calm and relaxed as he gently pulses out "East of the Sun" and a dreamy "Stardust." His read of " I've Got A Right to Sing the Blues" is gently regretful, while he gets coy on "Sweet Lorraine" and has fun with a cozy " ...

Audiophile Audition (Robbie Gerson)
5-STARS The Great America Songbook is both specific and vague. While it consists of pop and jazz standards, there is no complete agreement on which songs are in this category. The music usually comes from pop, jazz, theatre and film, and frequently includes selections from George Gershwin, Cole Porter, Irving Berlin, Jerome Kern, Harold Arlen and ...

Jazz Journal (UK) (Mark Gilbert)
"There is nothing groundbreaking here. I'm trying to be as honest and fresh as I can within the tradition". That might sound like a recipe for blandness, and true, there's nothing offensive in this solo piano recital. Kocour is a master of the tuneful and enchanting interpretation of the jazz standard. But the set isn't quite as innocuous as his de ...

MWE3.com (Editor)
The 2019 CD release of East Of The Sun by Michael Kocour will strike a positive chord among fans of jazz piano. For the ten-track release, the artist's third album of solo piano, Michael cracks open the Great American Songbook and the results are both surprising and quite ear-opening. The liner notes by Mark Stryker are quite illuminating as it spe ...

Jazz da Gama (Raul da Gama)
From the first few phrases of this disc East of the Sun by Michael Kocour it becomes clear that music to this pianist is the elixir of life; the urgency and vivacity of this performance and the generosity with which he treats each familiar melody leads one to experience a kind of life-giving spark that has ignited our collective sensibility. Every ...

All About Jazz (Jack Bowers)
4-STARS Here's another well-planned and immaculately recorded solo album by pianist Michael Kocour, his second such enterprise for OA2 Records (the first, Wherever You Go, There You Are, was released in 2015). As its title suggests, East of the Sun consists almost entirely of gems from the Great American Songbook with one zircon (guitarist Don Gib ...

Michael Kocour
Wherever You Go, There You Are
OA2 Records 22119