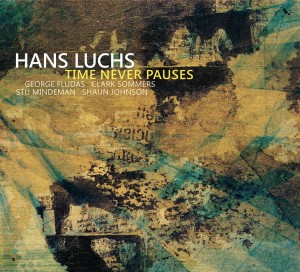 Hans Luchs has successfully assimilated the style of the guitarists of the Meters or Sly & The Family Stone, but also effectively moves jazz modeled on John Scofield.
All About Jazz, Italia

Chicago-based guitarist and composer Hans Luchs makes his debut as a leader with a beautifully crafted, pulsating and wide-reaching set of original compositions, along with two classic ballads by Duke Ellington and Cole Porter. With some of Chicago's finest - drummer George Fludas, Clark Sommers on bass, Stu Mindeman on piano, and Shaun Johnson on trumpet - they explore the twists and turns of "Das Lumenmeister" and "Tuesday Night Delivery," and luxuriate in the classic "Get Out of Town," performed as a haunting ballad. To launch his recording career, Luchs has crafted a lyrical and mature musical statement.

Jazz Weekly (George W. Harris)
Guitarist Hans Luchs leads an impressive and flexible team with Shaun Johnson/tp, Stu Mondeman/p, George Fludas/dr and Clark Sommers/b through a mix of originals and covers. His touch is lovely and delicate on his read of Duke Ellington's meditative "Come Sunday" and melancholic "Get Out of Town" by Cole Porter. The mix of trumpet and horn shows it ...

Midwest Record (Chris Spector)
Once again, Chicago has something to be proud of. Here comes a young guitar jazzbo that brings a rock sensibility to his left leaning playing and cooks up a dandy contemporary set that really works well. Sleek and modern with just the right touch to bring young and old into the tent, Luchs is a real comer with an impressive debut well worth your ...

WDCB (Paul Abella)
Hans Luchs is a fantastic Chicago guitarist with a new disc out titled Time Never Pauses. With his stellar band – Stu Mindeman on piano, Clark Sommers on bass, George Fludas on drums, and Shaun Johnson on trumpet – they work their way through a program of mostly Luchs's originals. "Hello Janssen" is the most exciting tune here, with a drum ...

Gerald Siclovan (Gerald Siclovan)
The superb young Chicago guitarist and composer Hans Luchs has recently released his first album, "Time Never Pauses". Luchs is a guitarist of considerable originality, and his unique performance style is echoed in the compositions he has written for this debut, which also includes pieces by Duke Ellington and Cole Porter. Mr. Luchs has an origi ...

WTJU - Richmond (Dave Rogers)
This is Chicago-based guitarist Hans Luchs first disc and there is no doubt he's ready. He composed eight of the ten tunes on offer and selected Ellington's "Come Sunday" and and Cole Porter's "Get Out Of Town" as the remaining two. He is a skilled and thoroughly modern player and his group, featuring George Fludas (drums), Clark Sommers (bass), St ...

Downbeat (Scott Yanow)
Guitarist Hans Luchs, a fixture on the Chicago jazz scene since 2007, makes his recording debut as a leader on Time Never Pauses. He utilizes a quintet of local musicians to perform eight of his originals, plus the songs "Come Sunday" and "Get Out Of Town." Luchs' compositions are more notable for their original and often-stimulating chord ...

All About Jazz (Budd Kopman)
While it does not scream downtown, avant-garde, uber originality, guitarist Hans Luchs debut recording, Time Never Pauses, is far from a vanilla, "jazz as style" offering, and, in fact has much going for it. For one thing, his band, consisting of drummer George Fludas, bassist Clark Sommers, pianist Stuart Mindeman and Shaun Johnson on trumpe ...

All About Jazz (C. Michael Bailey)
Chicago-based guitarist Hans Luchs draws more from the recent than far past. More John Abercrombie and John Scofield than Wes Montgomery or Grant Green. His debut recording Time Never Pauses is a collection of eight original compositions and two transformed standards reveals the continued refining of modern jazz composition well past the head-solo ...

All About Jazz (Jack Bowers)
Not much can be said about Hans Luchs aside from the fact that he lives in Chicago, looks to be fairly young and plays an intense, assertive and agile guitar on Time Never Pauses, which, incidentally, is Luchs' recorded debut as leader of his own group. Luchs is also a writer who composed eight of the album's ten selections (the others are Duke E ...