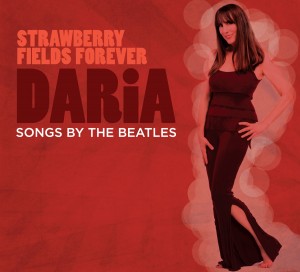 ...a voice that utterly captivated me the first time I heard it. The voice of Daria in action...a singer with the talent to place her in the upper levels of the jazz vocal art.
- Don Heckman, International Review of Music

Whether scatting across the crisp accents of a driving cluster of jazz horns, or blending into the intimacy of a jazz trio, Daria finds the beating musical heart of whatever she is singing. And so it goes with Strawberry Fields Forever, her wide-ranging, musically rich tribute to the Lennon and McCartney songs of the Beatles. Along with fellow arranger and bassist Sam Bevan, Daria approaches the challenge of presenting some of the 20th Century's most popular works by allowing her rich vocal timbre and deep musical sense the opportunity to discover new interpretive possibilities in the music. With over a dozen top-flight Bay-area musicians contributing, Daria reinvents ten Beatles classics - including big hits such as "Come Together" and "Can't Buy Me Love," and the less commonly performed "Fixing a Hole" and "Julia" - and closes out the set with her own composition, "She's Going Home."

Michael's Music Log (Michael Doherty)
Strawberry Fields Forever, is her tribute to The Beatles. There are a lot of Beatles tribute albums out there, as you know, in basically every musical genre you can think of. What Daria does on this album is focus mostly on the band's later years, with songs from Sgt. Pepper's Lonely Hearts Club Band ("When I'm Sixty-Four," "Fixing A Hole"), Abbey ...

AXS (Paula Edelstein )
Jazz vocalist Daria has released Strawberry Fields Forever, Songs By The Beatles on Origin/OA2 Records as the culmination of her own extensive solo touring and performance schedule. The 11-track recording features many of The Beatles' most popular compositions that Daria and her 16-member ensemble play with different rhythms and melodic structures ...

BeBop Spoken Here (UK) (Lance Liddle)
Am I the only person who prefers many of the Beatles' songs when they're performed by someone else? I gave Kenny Ball's version of When I'm 64 the nod over the original and I like Daria's version even more than that although the gender reversal implied by the lyric does feel strange to an old chauvinist like me! When I get older losing my h ...

Musical Memoirs (Dee Dee McNeil)
Daria's vocals rise above a dynamic horn section and expressive percussion work that puts a strong groove into "When I'm Sixty-four." That opens her album as this vocalist brings the listening audience an interesting assortment of Beatle tunes with fresh jazzy arrangements. Sam Bevan and Daria have collaborated on arranging these popular compositio ...

Jazz Music Archives (John Sanders)
A jazz tribute to the Beatles is not unusual, there are many out there, but what is more selective is a tribute that tries to re-shape the Beatles' original music, and does so successfully, and that is what we have in Daria's creative re-structuring of the ‘fab four' on her new album, "Strawberry Fields Forever (Songs by the Beatles)". Daria and ...

Midwest Review (Chris Spector)
After a decade with Dan Hicks, Daria has reinvented herself as a gal. Mixing jazz with southern hemisphere jazz/world and a bunch of swing, Daria comes across as our kind of gal. Do the Beatles need another set of reinvention? Only if it's as smart and sassy as this set. Putting you on the edge of your seat to expect the unexpected, the most ha ...

The Jazz Page (Glenn Daniels)
Taking on songs of the Beatles can be a daunting task, but it's one that vocalist Daria handles with perfection on Strawberry Fields Forever. The singer delivers the lyrics and the vibe here with the grace of her obvious experience. She seamlessly shifts from ballad to swing on a recording that is nicely balanced. The arrangements provided by Daria ...

Jazz Mostly (Bruce Crowther)
With this album, Daria takes up a demanding challenge, because in common with many latterday composers of pop songs, John Lennon and Paul McCartney did not customarily follow the 32-bar AABA pattern for popular songs that has supplied so much material to the jazz repertoire. One result of this is that with only scattered exceptions the songs of the ...

The Jazz Owl (Travis Rogers Jr.)
I'm glad Daria called the album Strawberry Fields Forever; Songs by the Beatles (OA2 Records 22129). That subtitle offers Daria some creative latitude to reinterpret as she sees fit and desires to do. That is to say, she does not sing the Beatles' classics as mere repetitions, rather she reinvents those classic in Jazzy, sometimes bossa nova, arran ...

LA Jazz Scene (Scott Yanow)
Daria, a delightful singer from Northern California who in the past has explored a combination of jazz and World Music in addition to touring as a backup singer for the late Dan Hicks, recently released a CD on the Origin label (Strawberry Fields Forever, Songs By The Beatles) of her versions of Beatles songs. However it was obvious from the beg ...

Jazz DaGama (Raul DaGama)
Beatles repertoire, you might think, at the very outset, has been done to death by vocalists from every spectrum of the musical rainbow: Beatle-sy, jazzy, orchestral, Afro-Cuban, Brazilian and more… How differently could anyone hack the songs out once more? Well perish that thought. You haven't heard Daria yet. You'll ‘blow your mind out', as t ...

Pop Culture Classics (Paul Freeman)
Daria has reimagined Lennon/McCartney songs, giving them jazz twists and often utilizing bossa nova or Afro-Cuban rhythms. Approach the project with open minds and ears and the results will be rewarding. The tunes take on an entirely different feel. The vibrant, inventive vocalist gives "Can't Buy Me Love" a very cool sound. "The Fool On The Hill" ...

Downbeat Magazine (J. Poet)
The Beatles catalogue is imprinted on the DNA of several generations of listeners, so artists may find it daunting to put together an album of covers that won't have people tuning out after the first note. With a formidable crew of Bay Area jazz players along for the ride, including co-arranger Sam Bevan, vocalist Daria successfully reinvents 10 ...

O's Place Jazz (Dr. Oscar Groomes)
You can't argue with a program based on the Beatles songbook. It's been exploited by countless musicians successfully. On Strawberry Fields Forever Daria puts a mild, jazzy, country/pop twist on the classic tunes. Her voice is pleasant, crisp and inviting. Our favorites are "Come Together" and the swinging "Can't Buy Me Love". Beatles fans w ...

Positive Feedback (David W. Robinson)
News flash: I do not usually care for covers of The Beatles. No way. No how. Not cutesy cover bands; not musicians who try to sound like them; not cover music. The Beatles were unique…sui generis…no toca white man! And so, when I was approached to review Daria's new album, Strawberry Fields Forever, I was friendly, but not enthusiastic. In ...

LA Jazz Scene - Waxing Poetic (Scott Yanow)
Daria, a very talented singer from Northern California, on Strawberry Fields Forever performs ten songs composed by either Paul McCartney or John Lennon. However this is not a typical Beatles tribute album or an attempt to merely duplicate the famous versions of their hits. The arrangements of Daria and bassist Sam Bevan turn the pop/rock songs int ...

Improvijazzation Nation (Dick Metcalf)
I'm not a really strong fan of "cover" albums, but Daria's swingin' high-talent vocals on these classics from the Fab 4 caught my ear as soon as I started spinning them… her take on "When I'm 64", for instance, is really upbeat & timely… very cool! I've no doubt that all four Beatles would be snappin' their fingers right along to the beat on D ...