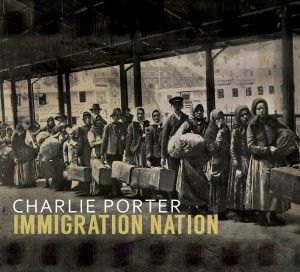 All About Jazz - Interview (Nicholas Mondello)
Charlie Porter: Discovering Horizons Past, Present And Future Charlie Porter is one of the most insightful, creatively brilliant and truly dynamic trumpet artists performing today. Porter straddles both the jazz and classical trumpet worlds with ease and has garnered highly-celebrated performance and recording reviews. An innovative composer and ...

Cadence (Bob Rusch)
IMMIGRATION NATION [OA2 Records 22177] is CHARLIE PORTER's compelling work dedicated to immigrants. The work is divided into two sections — Leaving Home and New Beginnings. Each part is comprised of six pieces [78:52]. It reminds me of Freddie Hubbard's "Song of Songmy" [1970], but performed with a smaller ensemble. Hubbard employed a large group ...

Jazz N'More (Switzerland) (Phil Stockli)
Charlie Porter's "Immigration Nation" is a two-part hardbop suite with a political message in the style of Wynton Marsalis. In the twelve original compositions he celebrates America's tradition as a nation of immigrants. The frontline consists of Porter with his warm, full trumpet sound and the fiery alto saxophonist Nick Biello, who can be heard h ...

Chicago Jazz Magazine (Hrayr Attarian)
Trumpeter Charlie Porter's second release as a leader, Immigration Nation, is a stunning magnum opus that demonstrates a maturation of the ideas and concepts explored on Porter's eponymous debut. Moreover, this tribute to America and its immigrants is a many layered, two-part work that is both multifaceted and thematically cohesive. Porter leads a ...