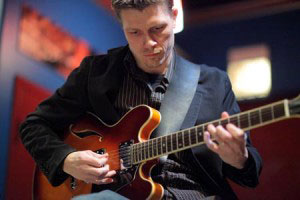 Guitarist Scott Hesse is a well-respected figure in the Chicago jazz community. Known especially for his harmonic and rhythmic inventiveness, Scott is equally at home in straight-ahead or avant garde settings. Since moving to the Windy City in 2005, Scott has played at every major jazz venue in the area. In addition to performing, Scott is an avid composer and music educator.

Since 2007, Scott has led the guitar program at Eastern Illinois University. In 2009, he joined the faculty at Harold Washington College in Chicago. Scott is also a frequent guest clinician at Lane Tech High School in Chicago, where he was commissioned twice to write pieces for their guitar ensemble.

As a leader, Scott has recorded three CDs, and appears on a host of others. Currently, Scott is involved in a number of projects including Dee Alexander's Evolution Ensemble, the Marlene Rosenberg Quartet (MRQ), the Stafford James String Ensemble, Vincent Davis' Percussion Plus, and the Victor Garcia Organ Group. Scott is also preparing new music for his next recording with his trio.

Scott holds a BA in Cultural Studies from Empire State College in New York and a Master's Degree in Jazz Composition from DePaul University in Chicago.