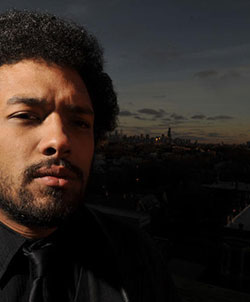 Drummer/producer, Makaya McCraven brings together "future-is-now drumming" with his roots in jazz and world music tradition to form his unique and powerful sound. Regarded as "one of Chicago's most versatile and in demand drummers" (Chicago Reader) and described by Downbeat Magazine as "exceptional on the drums," Makaya McCraven moves between genres at lightning speed. Born in Paris in 1983 to drummer Stephen McCraven and Hungarian folk singer Agnes Zsigmondi, Makaya's wide ranging influences include hip hop and funk, which inform his unique, exciting approach to music. Unquestionably respected as a jazz artist, Makaya also "sees no need to suppress his hip hop chops or rock spirit in an effort to fit in and be dubbed a jazz drummer" (AllAboutJazz.com).