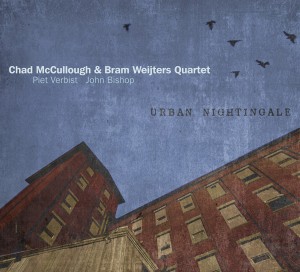 Now with multiple tours of Belgium and the western U.S. under their belts, Seattle-based trumpeter Chad McCullough and pianist Bram Weijters from Antwerp present their second recording of modern, lyrical originals. With bassist Piet Verbist and drummer John Bishop, the quartet creates a perpetually unhurried environment where melodies can unfurl over harmonically compelling compositions. Bram displays a Brad Mehldau-like touch on his "Buildings in a Dark City," McCullough's burnished flugelhorn searches on "Nightingale." "... a deliberate feast, which very sympathetically wins over the listener." - Jazz Flits, Netherlands.

All About Jazz (Dan McClenaghan)
Chad McCullough, with one CD under his own name - the outstanding Dark Wood, Dark Water (Origin Records, 2009) - has also contributed his distinctive voice to recordings by the Kora Band and Tunnel Six, all under the Origin Records banners. But the Seattle-based trumpeter must have a European sensibility; his finest work to date has been in teaming ...

Midwest Record (Chris Spector)
The Seattle/Antwerp connection shows us the corner where cerebral meets moving easy for a Friday, after hours session where having a drink and chilling out beats fighting traffic. More than background music and not nearly as artsy as it might seem when you aren't listening too closely, this crew brings some different sensibilities to the stew that ...

eMusic (Dave Sumner)
Follow-up album to last year?s excellent Imaginary Sketches. McCullough?s trumpet and Weijters? piano have a symbiosis that should be the envy of others. This is jazz for a rainy day, no matter if it?s the cabin-fever variety or the kick back and relax sort of thing. McCullough gets to soaring, but has weight on those wings, and Weijters has a nice ...

Jazz Society of Oregon (George Fendel)
Seattle based trumpet and flugelhorn ace McCulloch teams up with Belgian pianist Weijters on nine original compositions, eight of which were written by the pianist. McCulloch displays a warm, lyrical approach sometimes reminiscent of Art Farmer, and Weijters writes distinctive, unhurried melodies featuring a silky, crystalline touch. The quartet is ...

Jazzflits- Netherlands (Herman te Loo)
The title of this second CD by the Bram Weijters / Chad McCullough Quartet is well chosen. The melodies that the Belgian pianist and American trumpeter have written are sweet-toned like a nightingale. But they are embedded in a contemporary urban context. The two leaders are sometimes shamelessly romantic, like the melody of 'Love Song' or 'Down ...

Bird Is The Worm Jazz Blog (Dave Sumner)
Following on the success of their 2011 collaboration Imaginary Sketches, trumpeter Chad McCullough and pianist Bram Weijters display with their latest release Urban Nightingale that they are truly a perfect match creatively. Despite originating from opposite ends of the globe, the two have a symbiotic connection from both a perspective of group ...