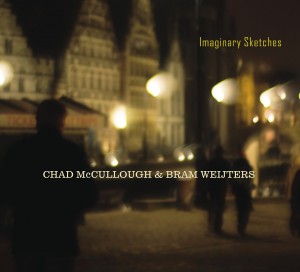 Building on several international collaborations, Seattle trumpeter Chad McCullough and Antwerp-based pianist Bram Weijters document the unique blend of their compositional and performance styles. From the near stand-still tempo of Weijters' "Another Dark Ballad," to the spiraling search of "Imaginary Folk Song," to the burning, and aptly titled, "Speeding," the musical chemistry is constantly twisting and turning. McCullough's warm lyricism has a great counterpart in Weijters' subtlety and drive, and here, with drummer John Bishop and bassist Chuck Deardorf, the group is captured in a mood-inducing set of music that is uniquely their own.

Oregon Music News (Tom D'Antoni)
Seattle-based trumpeter Chad McCullough has quickly come into his own. His addition to The Kora Band put it over the top. Last year's album The Sky Cries with Slovakian pianist Michal Vanoucek along with Portland bassist Dave Captein, and Seattle's Matt Jorgensen (drums) and Mark Taylor (sax) was well received. On the heels of that comes a colla ...

Jazz Flits (Herman te Loo)
"A smashing debut, a deliberate likeable album, to win over the listener." This quartet recording with trumpeter from Chad McCullough's Seattle is traditional. That does not mean that the group with bassist Chuck Deardorf and drummer John Bishop is mainstream, it's just that the compositions that the two leaders deliver more right-to-earth feel ...

Jazz Society of Oregon (George Fendel)
Seattle's Origin Records has become known as a label specializing in original music. Sometimes the concept falls flat, but frequently it works quite well. Almost all the tunes here are by members of the quartet. What it ultimately seems to come down to is that McCullough is a scintillating player and an authoritative presence on trumpet and flugelh ...

JazzReview.com (John Vincent Barron)
Adding to his growing body of work for Seattle's Origin Records, trumpeter Chad McCullough teams up with Belgian pianist Bram Weijters for Imaginary Sketches, a compelling set of original compositions, full of lyricism and harmonic delight. Along with bassist Chuck Deardorf and drummer John Bishop, the works as a showcase for thoughtful improvising ...

Jazzmozaďek, April 2011 (Peter De Backer)
This music is moving, very melodic, and lyrical. with nicely building solo's- like in "Another Dark Ballad," where Weijters is at his best. People who love accesible, but tastefull mainstream jazz, are well served with this CD. (translated) ...

Bird is the Worm (Dave Sumner)
Trumpet. Piano. Bass. Drums. That's how I'm gonna start this Tiny Review. Four instruments; four simple words, and the short silent pause in between each unhurried word. In a world of modern jazz, where the sounds are as disparate as the instrumentation, here, on Imaginary Sketches, we have a simple straight-forward jazz album with modern jazz a ...

Jazzenzo (Annemarie Janus)
Pianist Bram Weijters belongs to the new generation of promising jazz talents from Belgium. You could compare his playing to that of Brad Mehldau. The Co-leader of this project, the talented trumpeter Chad McCullough is from Seattle, where he along with drummer John Bishop, is the driving force behind Origin Records. This is an American label for c ...

Jazz Halo (Belgium) (Ferdinand Dupuis-Panther)
The pianist Bram Weijters we have already presented at Jazz Halo with other albums - see information. He is part of a young generation of promising Belgian jazz musician. Among the recent projects in which he has participated include Dez Mona, Hamster Axis of the One-Click Panther, Koen Nys Quintet, Fables of Fungus and his own Bram Weijters Trio. ...