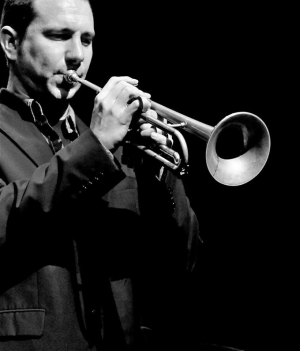 ... a thoughtful improviser with technique to spare.
John Barron, All About Jazz

Trumpeter / composer Chad McCullough is a modern musician with an ever broadening concept. He has four critically-acclaimed albums under his own name, is a sideman on countless others, several tours around the globe, and is a key member in countless ensembles. Called "one of Seattle's young musical gems" by Allaboutjazz.com, he's been carving out a name in modern jazz.

He is a member of the West African-inspired group The Kora Band, a group whose debut recording "Cascades" spent weeks on the national World Music airplay charts, peaking at #12, and won NW Recording of the Year at the annual Earshot Awards. They were recently awarded a CMA New Jazz Works grant for their upcoming record. He also tours with Tunnel Six, an international group that has been awarded 3 Canada Council of the Arts grants, and whose debut record made the top '100 albums of 2011' on eMusic. His quartet with Belgian pianist, Bram Weijters, has recorded two albums co-released on Origin and the Belgian DeWerf label, and they've toured Northern Europe annually since 2010.

Chad recently relocated to Chicago where he performs with his Spin Quartet, which includes Geof Bradfield, Clark Sommers and Kobie Watkins. Their debut recording will be released in early 2014.

As a composer, he has scored for film, written for various brass ensembles, dancers, and string quartets and quintets- in both classical and jazz idioms. He is also in high demand as an educator, and frequently speaks about jazz music and the trumpet to students of all ages, giving clinics at high schools and colleges throughout the country. He has been involved with mentoring projects run by the Seattle Repertory Jazz Orchestra, and the radio station KPLU, and has done educational outreach in several nationally recognized music programs.