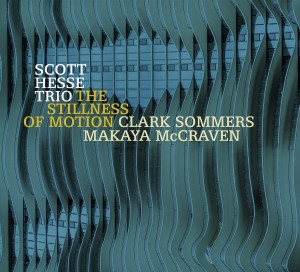 The Stillness of Motion brings together a riveting trio of Chicago's finest for a wide-ranging set of originals by guitarist Scott Hesse. Along with bandmates Clark Sommers on bass and drummer Makaya McCraven, they use this intimate setting to weave their highly individual voices together in a rich tapestry of group improvisation and composition.

Reviews of The Stillness of Motion

Midwest Record (Chris Spector)
Another jazz educator that hasn’t let the classroom go to his head, this Chicago string bender sounds like he came from Indianapolis, if you know what I mean. Seamlessly sweet stuff by a cat that gets around but should still get out more, this is some of the best hands jazz guitar can be in. Loaded with chops that never go overboard even when r ...

MWE3.com (Robert Silverstein )
Seattle based Origin Records continues to refine and redefine the spirit of 21st century jazz with a number of releases that borders on prodigious. Among their many fine recent titles is The Stillness Of Motion by The Scott Hesse Trio. Chicago based Hesse has composed a range of instrumental trio tracks while receiving support from his trio mates, ...

Jazz Weekly (George W. Harris)
Guitarist Soctt Hesse taps into his inner Jim Hall on this trio date with Clark Sommers/b and Makaya McCraven/dr. The mood is gentle and subdued, with even the tune called "Hendrix" a quiet avalanche. There's some chugging rhythms on "In The Air Again," but the emphasis is on McCraven's sophisticated and stylish brushes and cymbal work serving as a ...

Music Lounge - WDCB, Chicago (Paul Abella)
Chicagoan Scott Hesse's got a new trio with bassist Clark Sommers and drummer Makaya McCraven, and they have a new album out on Origin called The Stillness of Motion. For those of you familiar with Jeff Parker's trio, the sound will be familiar - a ripping and supple rhythm section playing alongside a guitarist with an impossibly dry tone that m ...

Improvijazzation Nation (Rotcod Zzaj)
I have no doubt that jazz listeners in search of total-cool work in trio sessions will love Scott's splendid guitar work (he's joined by Clark Sommers on bass & Makaya McCraven on drums) on this ten-song gem. Tunes like "Blues Sketch" definitely bear out their title… super jazz, to be sure. The beauty of the trio's playing is that there's nothi ...