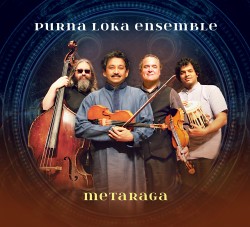 'A general communication of good will.' East and West unite in the album 'Metaraga'

"East is East, and West is West, and never the twain shall meet," Rudyard Kipling wrote. But violinist Purnaprajna Bangere is out to prove that not only can they meet, they can become one.

Bangere, a mathematician and musician based in Lawrence, and the Purna Loka Ensemble have recently released "Metaraga," an album that uses mathematical formulas to dissolve the boundaries separating Eastern and Western music.

If anyone can take on such a monumental task, it is Bangere, who has been steeped in classical Indian culture since he was a child.

"I grew up in Mysore, which is kind of a unique city in India," Bangere said. "The British ruled India, but Mysore had a king who was benevolent and very enlightened. In the early 20th century, the king of the Mysore state asked an engineer to give an estimate for a dam which would irrigate lots of places. The people did not have the money, so he pawned all the royal jewelry to build the dam.

"I was born when Mysore still had a king, even though by that time, he was nominal. But he was a great musician who played Carnatic (South Indian) music. And he was a great Western music critic, as well. Mysore was a highly cultured place with Eastern and Western music, and I was exposed to both."

As a child, Bangere says he was given "rigorous" training in Carnatic vocal music and violin, and he would practice every day for hours. But on Saturdays he would listen to Western classical music. Bangere's father, who was a mathematician, eventually sent his son to Bombay to study math, and Bangere would get his Ph.D. from Brandeis University in Boston.

But music continued to play an important part in his life. When he arrived in the United States, he was soon to discover that there was more to Western music than classical.

"I heard blues and jazz for the first time," Bangere said. "I came from India and missed home and had a deep sense of homesickness, and then you hear the blues. It really enters your consciousness never to leave it. I can listen to music without caring about where it comes from, but just for the pursuit of beauty of sound. I have never lost that. Jimi Hendrix can be as interesting to me as Beethoven, Mozart or Ravi Shankar."

In 1998, Bangere became a professor of mathematics and music at the University of Kansas, positions he still holds today. It was in Lawrence that Bangere met David Balakrishnan, the founder of the Turtle Island String Quartet, and the process that would eventually lead to "Metaraga" began.

"David came to my home and we got talking," Bangere said. "He has half-Indian ancestry, but he was born and raised here. He has an interest toward the East and I have an interest toward the West, so we started talking and finally five or six years ago, I started deriving a Western sound in a mathematical way. It comes from a very great French mathematician named Alexandre Grothendieck. He revolutionized how we look at mathematics, especially geometric structure."

Bangere realized he could use the methodology to fulfill his longtime desire to globalize music.

"No boundaries, no barriers. The Eastern sound started morphing into Western sound. It was like music in no-man's land. In a way, the music of East and West was negotiated by blues."

The result, "Metaraga," is an inspiring intellectual and musical achievement. Don't let the mathematical talk scare you off. This is music anyone can enjoy. Joining Bangere on "Metaraga" is a line-up of talent that includes Balakrishnan and local jazz bassist Jeff Harshbarger, who is also a lecturer in jazz studies at the University of Kansas. It was there he met Bangere.

Harshbarger and Bangere would occasionally get together to play, and one time Bangere asked Harshbarger to sit in on one of his concerts.

"Purna showed me this piece that he and his drummer were doing and what he wanted me to do," Harshbarger said. "We talked about the tonal center. Thankfully, Indian music stays in a single tonal center, so that makes my choices a little more obvious. But rhythmically, it's incredibly dense."

Harshbarger says it was a challenge to decipher Bangere's "weird, Sanskrit-like scribbles," but that after Balakrishnan worked with Bangere to make the notation understandable, the project became one of the most exciting projects he's been involved with. Harshbarger says those who enjoy the music of genre-bending artists like Bela Fleck, Edgar Meyer and Yo-Yo Ma's Silk Road Ensemble will enjoy "Metaraga."

"I think we share a common spirit with those ensembles," Harshbarger said. "Purna and I share that same virtuosic level of playing, and while Purna is a mathematician, there's a heart to this music."

Bangere says that Indian music, unlike Western music, is more concerned with microtones, the spaces between the notes, and that the purpose of Indian music is not mere entertainment but to change consciousness.

"Indian classical music is an inward-looking paradigm," Bangere said. "It is not a projection music. It calms and focuses the mind and puts you in a meditational mood."

And given these stressful times, "Metaraga" is just what the doctor ordered.

"I see the desperateness of the world and the only way I can help is through music," Bangere said. "I want 'Metaraga' to embrace all humanity. It's a synthesis of all world cultures, a general communication of good will. Give it the deep listening it deserves."

KFJC-FM, CA by MEDUSA OF TROY