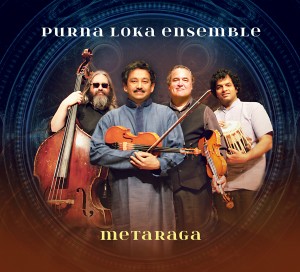 Curved phrases from Indian ragas melt into languorous blues microtones. The strains of music born on the American South's slave plantations mutate into the more angular notes and layered melodies of the Western classical genre...creating a shifting and arresting aural landscape that feels at once both achingly familiar and dazzlingly novel.
Sumana Ramanan, FirstPost (India)

Hailing from southern India, Purnaprajna Bangere began vocal studies at 7, and rigorous lessons on violin at 13 in the Parur style, characterized by high technical virtuosity and musicianship. Training under Vidwan H.K. Narasimhamurthy, he was deeply influenced by Indian classical music, Western classical music, and American blues, jazz and folk music. Now a Professor of Mathematics and Music at the University of Kansas, Purna combines the two disciplines into Metaraga, a systematic musical framework deeply inspired by ideas and concepts in Algebraic Geometry introduced by Alexander Grothendieck. The journey may start from any of the known genres, traverse into other musical worlds, and ultimately arrive in a "no man's land" - music with no east or west, which is also reflected in the ensemble name: Purna, meaning "complete," and Loka, Sanskrit for "world." Joining Purna on the journey is multi-Grammy winning violinist from the Turtle Island String Quartet, David Balakrishnan, bassist Jeff Harshbarger, and Amit Kavthekar on tabla.

"Absolutely beautiful and inspired! Each time I hear Metaraga I hear new things! The phrasings and synergy are what makes this a wonderful listening experience." - Al Di Meola

Midwest Record (Chris Spector)
Loka's cover shot makes it look like he's hanging out with Jerry Garcia and Johnny Cash, and in some weird way, this set of improvs based on classical Indian music sounds like he's made it so you hear hippie grooves smacking into hillbilly/Celtic riffs. Not at all what you'd expect if someone told you to check out this Indian music/world set, inter ...

Amazon (K Knox)
"Brilliant, innovative "Country & Eastern" Heard a track from this on my local pubic radio station and was so blown away I had to park the car in order to give it my full attention and find out who the players were. East Indian violin of the highest caliber intertwined with equally virtuosic violin rooted in Western classical, Appalachian blues an ...

Amazon (Customer Review)
"Innovative music album that transcends the boundaries of music using concepts from advanced math" Purnapragna Bengere along with David Balakrishnan and associates Jeff Harshburger and Amit Kavethkar has created a unique, genre-bending type of music. The music is based on a framework called Metaraga that takes the Indian Raga system and extends it ...

CD Hotlist (Rick Anderson)
OK, this is really cool: Purnaprajna Bangere is a violinist who was raised in southern India and trained in the highly technical Parur style of Carnatic classical music. He is also a professor of mathematics and music at the University of Kansas. On this project he combines these two disciplines, creating a unique style of contemporary Indian class ...

KFJC-FM, CA (MEDUSA OF TROY )
For those well-versed in Indian classical styles, Western improvisation and geometric progressions in music, the album "Metaraga" is a fascinating melding of math and music, eastern and western music. For those who don't recognize all of the influences within this album, it is an interesting blend of sounds and tempos, with two violins (mathematici ...

The Kansas City Star (Patrick Neas )
‘A general communication of good will.' East and West unite in the album ‘Metaraga' "East is East, and West is West, and never the twain shall meet," Rudyard Kipling wrote. But violinist Purnaprajna Bangere is out to prove that not only can they meet, they can become one. Bangere, a mathematician and musician based in Lawrence, and the Pu ...

Amazon (Geetanjali Tiwari)
This outstanding musical journey bridging the east and the west, compares with Ravi Shankar's Sitar concerto (with the London Symphony Orchestra, conducted by André Previn, premiered at London's Royal Festival Hall in 1971). Nothing came even close to that well-known sitar concerto by Maestro Ravi Shankar since the 70s till now. But now Purnaloka' ...

Amazon (K Knox)
Heard a track from this on my local pubic radio station and was so blown away I had to park the car in order to give it my full attention and find out who the players were. East Indian violin of the highest caliber intertwined with equally virtuosic violin rooted in Western classical, Appalachian blues and Celtic reels, all grounded with gorgeous b ...