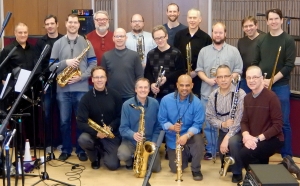 Scott Reeves, a NYC-based trombonist and alto flugelhornist, is a charter member and arranger for the big bands of Dave Liebman and Bill Mobley. He has also performed with the Vanguard Orchestra, Chico O'Farrill's Afro-Cuban Jazz Orchestra, the Oliver Lake Big Band, and many notable NYC jazz musicians. His quintet CD's "Congressional Roll Call," & "Shape Shifter," and Manhattan Bones' "Tribute," feature musicians such as saxophonist Rich Perry and pianists James Williams and Kenny Werner. As a composer, he has been commissioned by groups such as the Global Jazz Orchestra and the Kyoto Jazz Orchestra in Japan and the Santa Cecilia Conservatory in Rome. A veteran college jazz professor, Scott is Director of Jazz Studies at The City College of New York and has previously taught at five other colleges, including the Juilliard School. His two texts on jazz improvisation, Creative Jazz Improvisation and Creative Beginnings - published by Prentice Hall, are widely used by colleges worldwide.