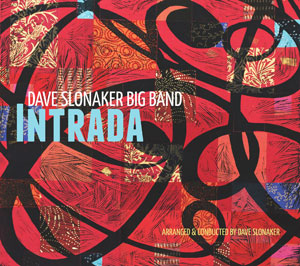 ...big-band jazz that quickens the pulse, swings hard and enhances the tradition.
Jack Bowers, All About Jazz

Though rooted firmly in the tradition of big band jazz, Dave Slonaker's Los Angeles-based Big Band looks toward the future of large ensemble jazz in this set of dynamic modern original compositions and arrangements. The band features an all-star cast of jazz and studio greats including Peter Erskine, Wayne Bergeron, Clay Jenkins, Bob Shepard, and Bill Reichenbach. An arranger and orchestrator for many Hollywood composers, Slonaker has credits on dozens of films and TV shows, and his works have been performed by the Count Basie, Clark Terry, and Woody Herman Bands.