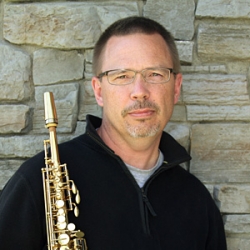 Steve Owen (composer, conductor, saxophonist) is a Philip H. Knight Professor of Music and Director of Jazz Studies at the University of Oregon. Steve has presented clinics at MENC conventions across the nation and directed All-State jazz ensembles in Colorado, Connecticut, Arizona, Texas, Nevada, California, Nebraska, Kansas, New Mexico, and Minnesota as well as Oregon. In 1991, Owen was one of two winners of the Ersted Award, the University of Oregon's top faculty award for distinguished teaching and in 2007 was likewise honored with the university's Excellence in Teaching Award. Steve is founder and co-director of the Oregon Jazz Festival, an annual workshop for college, junior high, and high school jazz ensembles, the University of Oregon Summer Jazz Improvisation Camp, and is on the faculty of the University of Kansas jazz camp.

Steve first began arranging for big band as a freshman in high school under the tutelage of his brother, Chuck Owen. His study of composition began in earnest as an undergraduate at the University of North Texas and continued through graduate school at the University of Northern Colorado where he received his M.M. in Theory and Composition with compositions and arrangements featured extensively in both locales by UNC's Jazz Lab Band I and UNT's One O'Clock Lab Band. Since then, Steve has received commissions and has had pieces performed and recorded by a host of high school, college, and professional ensembles throughout the U.S. and abroad. Included in this list are commissions by service bands, including the USAF Airmen Of Note, and pieces for Bobby McFerrin, Dave Weckl, and Anne Marie Moss. From 1984 - 2000, Steve's compositions were featured yearly at International Association of Jazz Educator's conferences. Recent commissions have resulted in pieces premiered in Frankfurt, Germany by the HR Big Band (Big Band of the Hessischer Rundfunk), in Taiwan by the Taipei Jazz Orchestra, and at jazz festivals in Colorado, Texas, Oregon, and Washington. As a saxophonist, Steve appears regularly as a soloist at high school and college festivals and is featured on two recent Origin/OA2 big band CDs--Dan Cavanagh's "Pulse" and the Dan Gailey Jazz Orchestra "What Did You Dream" CD. Steve's music is published by UNC Jazz Press, Sierra Music, and Heritage JazzWorks.