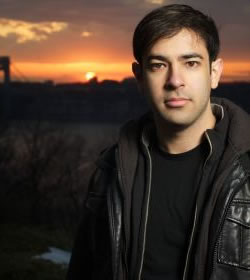 New York based musician Daniel Jamieson grew up in Toronto, Canada. Dan has appeared as a guest artist in various jazz festivals across Canada and has performed as a soloist with the Toronto Symphony Orchestra.

Daniel has performed with artists such as Ingrid Jensen, Tony Malaby, Tim Ries, Guido Basso, and Dave Young to name a few. Daniel was awarded the Rising Young Star Award at the 2008 Prince Edward County Jazz Festival. Currently Daniel works as a free lance performer, composer and educator in the New York area and writes for his own 10 piece jazz ensemble the "Daniel Jamieson Tentet" and his own big band the "Danjam Orchestra". This Orchestra recorded their debut album in May of 2010 and Dan received an ASCAP young jazz composer award for the track entitled "Song for Anna". The project was produced by Jim McNeely and featured John Riley on drums. Dan attended Claude Watson Arts Program at Earl Haig Secondary School and participated in the Humber College Community Music School Program. Daniel holds a Bachelor of Music degree in Jazz Performance from the University of Toronto where he studied with Tim Ries. Daniel also holds a Master of Music degree from the Manhattan School of Music where he studied with composer & pianist Jim McNeely.