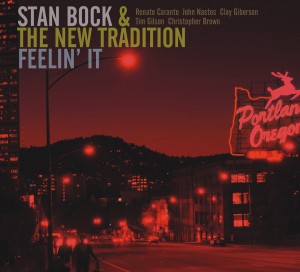 In coming within earshot of Stan Bock's music, listeners become moths drawn to a flame... (this) music is awesome!
-Jazz Review

Trombonist Stan Bock returns with a finely-tuned sextet for his third OA2 release. A highly improvisational group, they combine the group soloing aspects of traditional jazz with the forms, hybrid rhythmic grooves, and harmonies of more contemporary jazz. Featuring saxophonists Renato Caranto and John Nastos, and pianist Clay Giberson, the band performs a wide range of originals and an interesting collection of standards - made that much more interesting by the group's rakish new arrangements - including "Mercy, Mercy, Mercy," Bernstein's "Maria," Cole Porter's "Let's Fall in Love," and Joe Raposo's "Bein' Green."

Reviews of Feelin' It

Midwest Record (Chris Spector)
Maybe he should have called his crew the new traditionalists, just like the new kids in country called themselves in 1980 after crossover crashed and they all took to looking back. This date, even when working out on originals, feels like the classic late 50s/early 60 jazz coming out of Chicago. Sassy, soulful and always swinging, this is a delig ...

Jazz Society of Oregon (George Fendel)
Anyone who has performed with Bock or witnessed such a performance knows that he is a dedicated player with a likeablility factor that loosens everyone up, making them play at the top of their game. There are few who obviously enjoy blowing bop changes with like-minded colleagues more than Bock. That's why this CD took me a bit by surprise. I notic ...

Cadence (Jerome Wilson)
Feelin' It demonstrates that there is still a lot of life in the notion of marrying strong funk and r'n'b grooves to Jazz. Tim Gilson's bubbling electric bass is crucial in maintaining the drive. He grounds both the strutting funk of "Feelin' It" and "It's Not That Easy" as well as the broad, crawling pace of "Let's Fall In Love", a ...