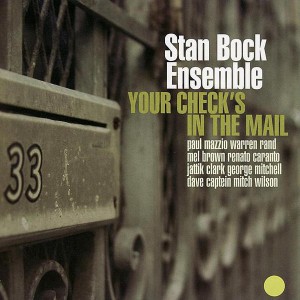 In coming within earshot of Stan Bock's music, listeners become moths drawn to a flame... Stan Bock, your music is awesome!
Jazz Review

Continuing to "work the grooves" they explored on 2003's "Night Grooves," Portland-based trombonist Stan Bock leads his small big band through fresh arrangements of standards such as "On Green Dolphin Street," "A Night in Tunisia," music by Thad Jones and Joe Henderson, and several band originals. Featuring the swinging drumming of Mel Brown and the tight horn work and inspired soloing of saxophonists Warren Rand and Renato Caranto, trumpeter Paul Mazzio and pianist/organist George Mitchell.

1 AIN'T NOTHIN' NEW
2 CRYSTAL'S WALTZ
3 YOUR CHECK'S IN THE MAIL
4 ON GREEN DOLPHIN STREET
5 BOUNCIN' THE BABY
6 JINRIKSHA
7 A NIGHT IN TUNISIA
8 BLUES FOR B.
9 I'LL REMEMBER APRIL
10 I CROSS MY HEART
11 THE GODFATHER (for James Brown)

Reviews of Your Check's In The Mail

Audio Audition (Jeff Krow)
Portland, Oregon trombone player extraordinaire, Stan Bock, has had a largely low key jazz career. He entered the U.S. Air Force band program in the mid-70s, where he served as a trombone soloist with various groups for nearly 19 years before retiring in 1994. He then settled in the Portland area and has been an active freelance sideman as well as ...

The Davis Enterprise (Ric Bang)
Stan Bock was born in a family of musicians. His father played cornet and was a high school band director; his mother was a piano teacher. By age 15, young Stan was playing "tailgate" trombone in his father's Dixieland band. After earning degrees at Fort Hays State (Kansas) and the University of Northern Iowa, Bock entered the Air Force Band pro ...

Cadence (David Dupont)
Veteran trombonist and bandleader Stan Bock also harks from the West: Portland, Oregon, to be precise, where he holds forth at a club called Jimmy Mak's with a medium size ensemble that packs the punch of a big band but offers the soloists the open spaces of a small ensemble. Your Check's in the Mail is the band's latest endeavor. Like most regi ...