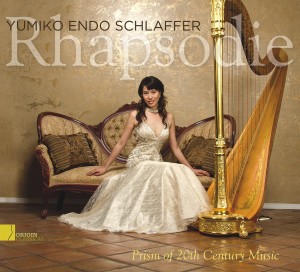 Since her impressive American debut recital at New York's Carnegie Recital Hall in May of 2000, shortly after completing her Masters degree at the Juilliard School, harpist Yumiko Endo Schlaffer has been steadily gaining a reputation as a masterful artist. Rhapsodie - Prism of 20th Century Music presents a wide range of works for solo harp from French, American, Russian and Japanese composers, written from the end of the 19th century into the 21st century. From some of the most romantic harp music to thoroughly avant-garde compositions, Yumiko's wide range of expression, color, and passion takes the listener on a musical journey.

Harp Column (Alison Young)
Like the luscious glamour of her CD cover, Japanese harpist Yumiko Endo Schlaffer plays with a luxurious richness as soft as the velvet she lightly places herself on. Rhapsodie is sheer grace and elegance. I am convinced a great deal of planning went into this CD. It?s not just one beautiful number after another with several French pieces that ...