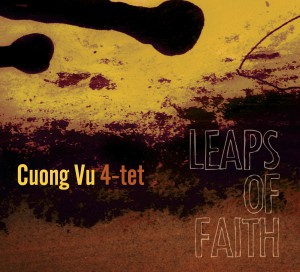 ...the point of Mr. Vu's music, at its best, is just that: to make you feel lost in it.
Ben Ratliff, NY Times

"That the band is able to make so many disparate elements intersect at all, let alone with cohesion and vitality, speaks to Vu and the band's marvelous imagination." -- JazzTimes. After a decade of recordings featuring only his original compositions, the master trumpeter and his band now turn their attention to the standard jazz repertoire, presenting decidedly unique interpretations of classics such as Body & Soul and My Funny Valentine, along with songs by George Harrison and Jackson Browne. As the band pays tribute to John Coltrane's "Giant Steps," they put a spotlight on Vu's efforts with the album's title track, "Leaps of Faith." Though only two electric basses, drums and trumpet, the group displays a staggering wealth of textural variety to complement their visionary improvisational explorations.

1. Body and Soul
2. All The Things You Are
3. My Funny Valentine
4. Leaps of Faith - Bergman, Takeishi, Poor, Vu
5. Child-Like - Cuong Vu
6. Something - George Harrison
7. I Shall Never Come Back - Cuong Vu
8. My Opening Farewell - Jackson Browne

Reviews of Leaps of Faith

All About Jazz.com (C. Michael Bailey)
The order and presentation of music on a recording or in a recital are every bit as important in the music producer's skill set as is choosing what music to include. Had trumpeter Cuong Vu introduced his Vu-Tet's Leaps of Faith with the title piece, or "Child-Like (for Vina)," it would have been easy to dismiss the recording as a well-intentioned ...

New York Times (Nate Chinnen)
The voracious sweep of postmillennial jazz has plenty of exemplars but few truer than the trumpeter Cuong Vu. Over the last decade he has upheld a dreamlike sound informed by post-bop but just as rooted in noise pop, grunge and ambient minimalism. He has an invaluable partner in the bassist Stomu Takeishi, who shares his fluency with electronics an ...

JazzReview.com (John Barron)
It's a bold endeavor to believe you can invoke freshness and vitality into thinly worn standards like "Body and Soul," "All the Things You Are" and "My Funny Valentine." Trumpeter Cuong Vu meets the challenge head-on with imaginative results on Leaps of Faith, a quartet outing with wide-open improvisatory exploration, melding consonant lyricism wit ...

All Music Guide (Adam Greenberg)
Trumpeter Cuong Vu built a reputation out of his original compositions and their high levels of ambience and envelopment of the listener. With Leaps of Faith, he moves into the territory of jazz standards. Applying sonic methods to constantly recognizable songs until they just break into unrecognizability. With a pair of electric basses, drums, and ...

Rifftides (Doug Ramsey)
Like Smith's, Vu's is a pianoless quartet, but the instrumentation is rather different: his trumpet, two electric basses and drums. He begins with three standards, "Body and Soul," "All The Things You Are" and "My Funny Valentine," assuring listeners that he is about more than 21st century space music. It's a clever strategy. Vu, bassists Stomu Tak ...

New York City Jazz Record (Matthew Miller)
For all of his sonic manipulations, kinetic energy and creative focus, trumpeter Cuong Vu never strays far from a strong melody. It is a unifying element in a professional career that has spanned nearly 20 years with his own idiosyncratic groups and associations with artists like Pat Metheny, David Bowie and Laurie Anderson, among many others. On t ...

Jazz Times (Steve Greenlee)
When not collaborating with top-ranking improvisers like Pat Metheny and Myra Melford, trumpeter Cuong Vu has spent the past 10 years making ethereal, languorous, cinematic music of his own writing. Standards? Not his thing. Not until now, anyway. At first blush, Leaps of Faith appears to be an about-face for Vu, whose previous albums have featu ...

All About Jazz (Jerry D'Souza)
Over the last 10 years, trumpeter Cuong Vu has made an impact as an innovator who filters music through the prism of his imagination. He has been agile enough to fit into bands as diverse as those led by Myra Melford and Pat Metheny, and has also carved a niche for himself as a leader who turns his compositions into distinctive portraits of startli ...

Downbeat Magazine (Peter Margasak)
★★★★ Trumpeter Cuong Vu moved back to his native Seattle in 2006 to teach, but five years later he's still working with the members of his long-running New York trio, drummer Ted Poor and electric bassist Stomu Takeishi. But on Leaps Of Faith, a gorgeous live recording made in Seattle in April 2010, he brings in second el ...

Jazziz (Shaun Brady)
Q&A with Cuong Vu: Back in Seattle With his career heating up following a stint in the Pat Metheny Group, in 2006 Cuong Vu made the opposite of the usual exodus and moved from New York City back to his former home of Seattle. There the Vietnamese-born trumpeter, now 41, revitalized the young jazz scene centered around the university of Washingt ...

All About Jazz (Ian Patterson)
It may require a leap of faith to entertain Cuong Vu's overhaul of jazz standards, but it was no easy step for Vu either, after 15 years doing his own thing. Innovative, too, the use of two bassists, with Luke Bergman holding down the bottom end and freeing Stomu Takeishi up to roam wide sonic territory. It can't have been easy for Bergman to enter ...

Cadence (Phillip McNally)
Trumpeter Cuong Vu's 4-tet appears to be bottom-heavy too, what with two electric bassists. And Takeishi and Bergman are really playing electric too; not the kind of bass work that tries to sound wooden through the amp. But Leaps of Faith is not the funk affair that it might make it seem. there are lost of electronics used on this live recording ...

Bird Is The Worm Jazz Blog (Dave Sumner)
Trumpeter Cuong Vu has established a sound quite unlike anyone else on the scene. With lighthouse moans soaring above a wash of dissonance and electronics, he?s created a post-bop ambient style of avant-garde. Or said differently, it?s the metaphorical equivalent of a straight-ahead jazz melody dropped onto a tiny desert island in a sea of chaotic ...