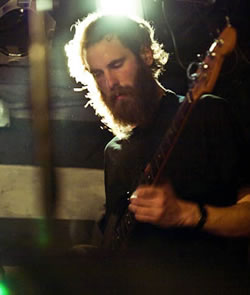 An innovative bassist, composer and producer who is constantly putting forth spirited work, Luke Bergman has become an integral part of the music scene in the Northwest. His artistic and educational efforts as well as his dedication to creative music have served as a touchstone for a new generation of Seattle musicians.

Bergman's music has garnered critical acclaim on a national and international level for his work with Heatwarmer, Speak, Thousands, and The Cuong Vu Group.

He is dedicated to the development of the local music community and serves as co-creator, organizer and artistic director of The Racer Sessions, a weekly performance series which is devoted to the advancement of avant-garde music in Seattle. Debuting new works each week and operating as a performance workshop for group free improvisation, the series has provided a place for artists to interact and inspire each other on a regular basis. Bergman also serves as a board member, producer, recording engineer and co-founder of Table and Chairs Music, a not-for-profit, independent record label that documents and promotes creative music in Seattle. As an experienced educator, Bergman offers a wealth of musical knowledge in many areas paired with an eagerness to reach students of all abilities.