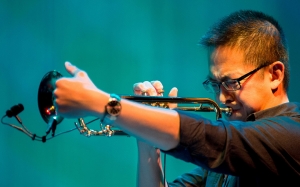 Listeners coming from jazz won't feel lost. Plenty of the genre's current obsessions are here: odd-meter rhythm patterns, slow soloing over fast rhythms (vice versa too), and a kind of bucolic lyricism. The point of Mr. Vu's music, at its best, is just that: to make you feel lost in it.
Ben Ratliff, New York Times

As a youngster, Cuong's intense dedication and love for music led him to a full scholarship at the New England Conservatory of Music where he received his Bachelor of Music in Jazz studies with a ditinction in performance. Transitioning from his studies in Boston, he moved to New York in 1994 and began his career actively leading various groups while touring extensively throughout the world. As a leader, Cuong has released five recordings, each making critics' lists of the 10 best recordings of their respective years. Each record displays how he has carved out a distinctive sonic territory on the trumpet, blurring all stylistic borders while developing his own compositional aesthetic.

A recipient of numerous awards and honors, Cuong was awarded the Colbert Award for Excellence: The Downtown Arts Project Emerging Artist Award. As an assistant professor in jazz studies, he was recently awarded the University of Washington's prestigious Distinguished Teacher Award and is a Donald E. Petersen Endowed Fellow. In 2002 and 2006, Cuong was a recipient of the Grammy for Best Contemporary Jazz Album as a member of the Pat Metheny Group. He's been recognized as one of the top 50 young Jazz Artists in an article called "The New Masters" from the British magazine, "Classic CD" and in 2006 was named the Best International Jazz Artist by the Italian Jazz Critics' Society. Amazon listed Vu's "Come Play With Me" on their "The 100 Greatest Jazz Albums of All Time."