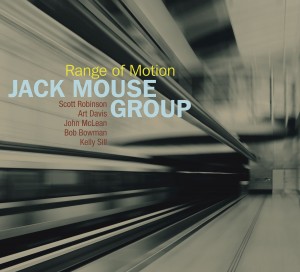 After decades of performing with some of the greatest names in jazz, drummer Jack Mouse finally gathered together a quintet of some of his longtime Chicago collaborators to put together this intriguing set of ten original compositions. With Art Davis on trumpet, Scott Robinson on woodwinds, guitarist John McLean, and two titan bassists splitting duties, Bob Bowman and Kelly Sill, Mouse's well-seasoned group aesthetic receives a long overdue recording debut.

Reviews of Range of Motion

Jazzespress (Lloyd Sachs)
In jazz, there are times when you can judge a book by its covers, and an artist by the musicians he pays tribute to with his own compositions. That?s the case with veteran drummer Jack Mouse?s new album, Range of Motion, which includes songs written for or dedicated to the great Bunky Green, ?50s innovator John LaPorta, Henry Mancini and Shelley M ...

Midwest Record (Chris Spector)
A Chicago drummer that?s played with everyone, including an impressive roster of the classic cats, puts out a set of originals that rivals anything in the classic Bluenote or Verve canon. Smoking sitting down jazz, the light here is on a crew of Chicago cats that gets a fine chance to show the rest of the world they are all world class players as ...

The Jazz Word (John Barron)
The title of this release aptly describes the various grooves cultivated by veteran Chicago drummer Jack Mouse. At times caught up in delightful swing, as on "The Breezeling," and at other times deliberately funky, as on "Hip Check," Mouse propels his bandmates forward with a fresh combination of energy and finesse. Guitarist John McLean, who a ...

Critical Jazz (Brent Black)
Origin Records is an often overlooked label when in reality they have a stable of artists that are as technically proficient and artistically gifted as most any other label one can think of. The Jack Mouse Group is certainly no exception and with a distinguished musical resume including work with such luminaries as Kenny Burrell, Bob Mintzer, and S ...

Folk & Acoustic Music Exchange (Mark S Tucker)
I'm kinda glad Jack Mouse named this CD as he did, as I find more than a little Paul Motian in his playing. Motian's Conception Vessel was one of a handful of LPs that early turned me on to the inimitable ECM label, and what now attracts me to Paul's method is what I found in Jack's: a strong tendency to lay an entire environment beneath the re ...

Oregon Jazz Scene (Tim Willcox)
Mouse is a veteran of the Chicago jazz scene. A quick gander at his bio reveals a sideman?s dream. Mouse has spent decades performing with a who?s who of jazz greats. His newest album is collection of 10 originals, mostly written by Mouse himself. His drum style lies somewhere between Shelly Manne, Paul Motian and Joe Morello. Loose, painterly and ...

Improvijazzation Nation (Rotcod Zzaj)
If the opening track, ?LaPorta? is any indicator, you?re in for one wonderful jazz ride ? Jack?s drums will transport you to movements you never knew existed on this one! Just the kind of jazz you hardcore jazzers will fall in love with in only moments? Jack is joined by Scott Robinson on tenor/soprano sax & flute, Art Davis doing trumpet & fluge ...

Jazz Page (Shigeyo Hyodo)
With a history of co-starring with famous musicians such as Stan Kenton, Clark Terry, and Randy Brecker, veteran jazz drummer Jack Mouse presents his debut album as a leader. In the quintet of masterful musicians including fellow Chicagoans Art Davis on trumpet and Scott Robinson on woodwinds, they perform 10 original songs, including dedications t ...

All About Jazz (Jack Bowers)
Jack Mouse, a sure-handed, high-energy drummer who is best known as a dependable timekeeper for groups large and small on the Chicago scene and elsewhere, moves to the head of the class on Range of Motion, leading a quintet whose members share his expansive, something-for-everyone point of view. Apart from his role as rhythmic helmsman, Mouse also ...

JazzHistoryOnline.com (Jim Eigo)
Staking out the vast middle ground between Dresser and Kennedy is drummer Jack Mouse?s new Origin CD, Range of Motion. Mouse composed all of the pieces on this album, but the structures are considerably looser than on Dresser?s album. He also closes his album with an impromptu duet with his tenor saxophonist, Scott Robinson, but the results are muc ...

Seattle PI (Jack Goodstein)
Drummer Jack Mouse has been around playing with a top notch list of jazz artists from James Moody and Stan Kenton to Randy Brecker and Kenny Burrell. With Range of Motion, he steps out to lead a set of musicians he's collaborated with over the years in a swinging examination of 10 of his original compositions. The debut recording is contemporary j ...

Jazz Weekly (George W. Harris)
Jack Mouse drives a team with Scott Robinson/woodwinds, Art Davis/tp-fh, John McLean/g and Bob Bowman or Kelly Sill/b. Mouse?s compositions have a lithe melodicism to them, with themes from ?LaPorta? or ?Hip Check? veering into solos at a whim. There is definitely a pocket for the band to groove on, but it?s about as deep as one on Karma Jeans, as ...

All About Jazz (Hrayr Attarian)
Drummer and educator Jack Mouse has a versatile and prolific career. In addition to playing, among many others, with trumpeter Clark Terry, saxophonist James Moody and pianist Stan Kenton he has been actively involved in education as a faculty member at various institutions and as a writer for percussion magazines. His debut album Range of Motion c ...

Percussive Notes (John Lane)
For decades, Jack Mouse has been a sideman for a long list of jazz greats, but Range of Motion represents his debut as a leader. Collaborating with several other Chicago-based musicians (Art Davis,trumpet; Scott Robinson, woodwinds; John McLean, guitar; Bob Bowman and Kelly Sill, bass), he has put together a terrific set of his original composition ...

Examiner.com (Carol Banks Weber)
When the pushy melodic canyon of â€śLaPortaâ€ť comes on, itâ€™s hard to believe this isnâ€™t a cover of some famous post-bop groove artist many decades before. Then, you read on the back of Jack Mouseâ€™s debut album, Range Of Motion on Origin Records, that he composed and arranged all 10 tracks. Even more astounding. The drummerâ€™s probably pi ...

Amazon (Grady Harp)
Jack Mouse is mighty - on the drums, on technique and on assembling a group of pros to bring this body of unique music together. There is a mixture of the hot new sound with an equal dose of nostalgic tunes that defy the listener to sit still. This is big sound jazz with a touch of Blue Note sound and despite the fact that the quintet numbers only ...