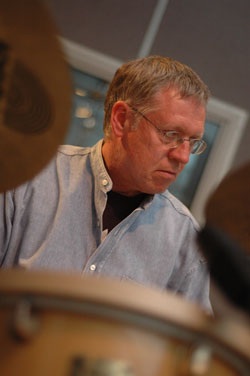 As a member of the Janice Borla Group, Jack can be heard on Janice's CDs Whatever We Imagine (P-Vine Records, Japan), Lunar Octave (DMP), Agents of Change (Blujazz) and her latest, From Every Angle (Blujazz), which Downbeat named as one of the "Best CDs of 2007." Also a member of the Dan Haerle Trio, he is heard on The Truth of the Matter (Seagull Records) and Standard Procedure (Blujazz), which was included in DownBeat's "Best CDs of 2005." Jack's multi-faceted career has been the subject of recent interviews in Modern Drummer and Jazz Improv magazines. He has authored articles for Percussive Notes and the IAJE-Illinois Newsletter. In 2005 he was a featured artist during the first online Virtual Percussion Festival presented at the University of Manitoba by the ALIVE Project (Accessible Live Internet Video Education).

Currently Coordinator of Jazz Studies at North Central College, Jack has also served on the faculties of the American Conservatory of Music, Benedictine University, Saskatchewan School of the Arts, Clark Terry Great Plains Jazz Camp, National Stage Band Camps, Jamey Aebersold Combo-Improvisation Camps and Birch Creek Farm Academy for the Performing Arts. He has been a faculty artist member of the Janice Borla Vocal Jazz Camp since its founding in 1989. As a member of the Bunky Green Quartet, he was among the first musicians to introduce jazz education to the Montreux Jazz Festival.

Jack has presented clinics and workshops at jazz festivals, music conventions, colleges and high schools throughout the United States, and is now available to do clinics online through the ALIVE Project (Accessible Live Internet Video Education). He is a staff artist/clinician for Yamaha Drums, Sabian Cymbals, Aquarian Drum Heads and Vic Firth Drum Sticks.