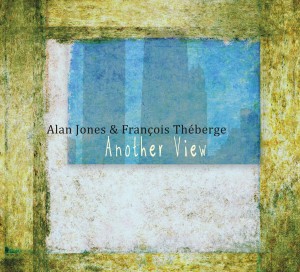 First meeting & playing together in Paris in the early '90s, Portland-based drummer Alan Jones knew he had found a life-long musical partner in the Montreal-born, Paris-based saxophonist, François Théberge. After multiple tours, recordings and musical discussions over the years, their decision to devote an album to all original music - with lyrics - came from one of those discussions. Noting how beautiful and intregal the human voice is to music, they wrote new compositions expressing miniature impressions, souvenirs, and feelings, while blurring the line between improvised and written moments. Rooted in jazz, they stroll seamlessly through other neighborhoods with a wide-range of accompanying master musicians, yet retain an intimate musical space for vocalists Marilyn Keller and Rebecca Kilgore to shine.

Reviews of Another View

Midwest Record (Chris Spector)
Two long time musical kindred spirits decide to go for it on an all original date for jazz orchestra that's heavy on the art jazz so much so that it's almost like a ricochet from the 50s. Programmed almost like a show, this is a set that colors widely outside the lines defying expectations swinging for the fences in the way that records that don ...