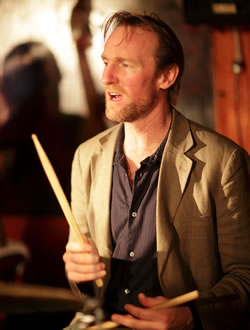 The variety of material that he performs, and his versatility gives Jones' playing a singularly engaging character.
-Leonard Feather, L.A. Times

Born in Longview, Washington in 1962. Alan was raised in Portland, Oregon where at the age of 6 he began playing the drums and guitar. In the fertile artistic climate of 1970's Portland he spent his early years listening outside of jazz club windows to such musical greats as Jim Pepper, Mel Brown, and Count Dutch. In fact, it was the organist from Amsterdam, Count Dutch, who after hearing the 16 year old at a jam session hired Alan to work with him on the road. It was a collaboration that was his first training ground and lasted until Dutch's untimely death three years later. Moving to Boston in 1980 he graduated from Berklee College of Music and spent 2 summers at the Banff Center for the Fine Arts in Canada.

New York City in 1984 when Alan arrived was, as always, a busy and exciting city for a young jazz musician. Alan quickly began organizing jam sessions at the Brooklyn apartment building he shared with Jim Pepper and bassist Ben Wolf. Through his association with Pepper, Alan came into contact with Ornette Coleman, Don Cherry Elvin Jones, Ed Blackwell, Jaco Pastorius, and many others. By 1987 Alan had made a number of recordings and was working up and down the coast as well as in the city. Following were 4 years of extensive touring throughout the U.S. with The David Friesen Trio and in Canada with Kenny Wheeler.

Alan next moved to Europe, splitting his home between Vienna and Paris. He has since enjoyed outstanding success appearing in Europe's leading jazz festivals and touring in England, France, Germany, Belgium, The Netherlands, Austria, Hungary, Spain, Portugal, Italy, The Czech Republic, etc.

Alan happily composes soundtracks for film, dance and theater as well as writing for his own Jazz ensemble THE ALAN JONES SEXTET. He is very much in demand as a clinician and private instructor while continuing an active world-wide recording and touring schedule.