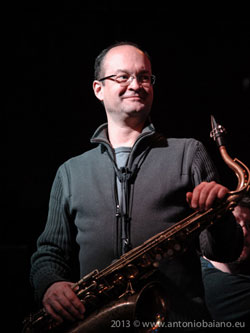 Born and raised in Montreal, the saxophonist, composer and arranger was involved with the Montreal jazz scene before moving to Rochester, NY in 1985 under a Canada Arts Council grant to study at the Eastman School of Music. He earned a masters degree in jazz and contemporary medias at Eastman and studied further at the University of Miami. He later toured as saxophonist and arranger with the Glenn Miller big band around the United States, Japan and Brazil for 14 months.

In 1990, he was invited by the Orchestre Regional Rhene-Alpes in Grenoble, France to be a guest conductor & lead saxophonist and to coordinate their repertoire. In 1991, he moved to Paris and involved himself in the jazz community. The artistic emulation in Paris lead him to meet many musicians from around the world. Besides co-leading his own big band in Paris, he became involved in various tours and recording projects around Europe. He was appointed professor of jazz arranging/composing at the National Conservatory of Music in Paris in 1995. In 1999, he was appointed conductor/composer of the European Jazz Youth Orchestra. In the fall of 2000, he succeeded Francois Jeanneau as Head of the Jazz and Improvised Music department at the Paris National Conservatoire (2000-2004). His current teaching activities include a full professorship at the CNSMD Paris, as well as invited professor at many Universities, colleges and Conservatoires around the world (Birmingham, Cologne, Toronto, Weimar, Akademy of Katowice in Poland).