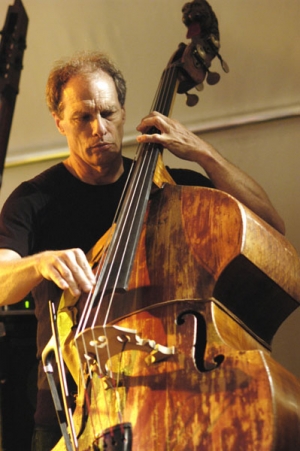 A bassist and composer of extraordinary scope, Moore's work combines the spontaneous, physical verve of jazz with the abstract dissonance of modern classical music.
Oregon Encyclopedia

As a founding member of the pioneering chamber jazz group, Oregon, Glen Moore helped redefine jazz in the late twentieth century. His love for the European symphonic tradition began as a child in Milwaukie, Oregon, where he was trained on both bass and piano. He performed around the state in his teens as a member of The Young Oregonians (which also included saxophonist Jim Pepper).

Moore met guitarist, pianist, and composer Ralph Towner at the University of Oregon in 1959. After earning a bachelor's degree in history and studying bass for a year in Copenhagen, he joined Towner in New York in 1967. They played at Woodstock (with singer Tim Hardin) and, in 1970, created the group Oregon with Paul McCandless and Colin Walcott. By 2009, the group - which Moore has called "an improvising orchestra" - had released twenty-seven albums, including a double CD, Oregon in Moscow (2002), with the Moscow Tchaikovsky Symphony Orchestra. The CD received four Grammy nominations. Oregon's music accompanied an Apollo mission to the moon, where craters are named after two of its songs, "Icarus" and "Ghost Beads."

A bassist and composer of extraordinary scope, Moore's work combines the spontaneous, physical verve of jazz with the abstract dissonance of modern classical music. He has written music not only for Oregon but also for vocalist Nancy King (a frequent collaborator since the early 1960s) and symphony orchestras (the Philadelphia Symphony debuted his "Firebat Suite" in 1985). He also composed music for a production of Shakespeare's Henry VI at New York's Joseph Papp Theater and for two solo bass albums. As a performer, Moore's work has ranged from appearances with poets to tours with ensembles led by Celtic singer Loreena McKinnet and oud player Rabih Abou-Khalil.

A member of the Jazz Society of Oregon's Hall of Fame, Moore made an impact on the local music scene as a teacher at Marylhurst College and Portland State University and in private lessons. Animated by a passion for discovery, his lively, inventive, humorous, and complex music has influenced musicians locally and around the world.

Moore provided the best summary of his work in a 2006 interview: "Using the technique of the classical guitar in order to expand the vocabulary of pizzicato bass is probably the thing I've spent most of my life learning and teaching." For more than thirty years, he has played a Klotz bass fiddle crafted in the Tyrol in about 1715, on which he has made extensive use of a unique tuning with both a low and high C string. Outside the group Oregon, Moore has appeared on 28 albums with musicians such as David Friesen, Carla Bley, and Jerry Hahn. He has written music for and arranged lyrics by his wife, Samantha Moore, for three CDs with Nancy King.

After twelve years in New York and Europe, Moore returned to Oregon in 1980 to live near Lincoln City. Then, after a number of years in the Portland area, he left for New York City in 1994, returning again to his home state in 1996. He lives in Portland and plays frequently with straight-ahead and improvisational jazz groups in the city.