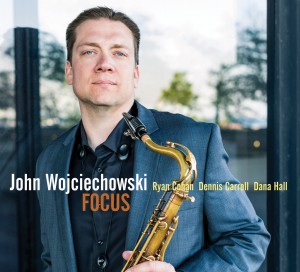 In choosing Focus as the title of this bristling, no-holds-barred album, saxophonist John Wojciechowski spells out his entire artistic philosophy, and does so with the succinct force that has marked his work throughout Chicago over the last decade. With his quartet of equally respected and dynamic musical partners - pianist Ryan Cohan, bassist Dennis Carroll, and drummer Dana Hall - they create a timeless recording full of rich, melodic compositions and inspired interplay.

Amazon (Dr. Debra Jan Bibel)
An initial three note-based riff sets the stage for pensive improvisations. This strong opening of the new quartet album by John Wojciechowski (Wojo) introduces a Chicago post-bop ensemble with a couple familiar jazz tunes and much of their own material. What follows is an absorbing, intriguing, and mysterious abstract statement by tom-toms in Dana ...

AXS (Carol Banks Weber)
There are times when you just want saxophonist John Wojciechowski, 41, to go on forever. "Elegy" is one of those times. The smooth jazz jutting up against the brusque cliffhangers of tonal disposition is among 10 very originally sounding tracks off the Chicago composer's new album, Focus. Originally from Detroit, the saxophonist moved to Chic ...

WDCB (Paul Abella)
Let's start this week with Chicago based saxophonist John Wojciechowski and his new album Focus on Origin Records. He teams up with a monster of a rhythm section, pianist Ryan Cohan, bassist Dennis Carroll and drummer Dana Hall. Wojciechowski's a pretty aggressive player on the tenor, and from the get-go on this disc, it's clear he's not planning ...

I Dig Jazz (Charles L. Latimer)
The jazz saxophonist John Wojciechowski is a native of Mount Clemens, MI, and a graduate of Western Michigan University. His dad was a sheet metal worker who moonlighted as a jazz organist, and who made sure music was a big part of his son's existence. After college Wojciechowski played briefly in New York, returned to Michigan, and when the worked ...

Midwest Record (Chris Spector)
Chicago has it's own brand of skronk and this set with a a stellar Chicago crew in tow might not sound like Sonny Rollins playing under a bridge but he certainly knows how to deliver the goods. Using mainstream jazz as a starting point rather than a destination, he marshals his chops to bring listeners into the tent and keep them on board. A tasty ...

Downbeat (Sean J. O\'Connell)
This date by saxophonist John Wojciechowski hangs in a tight classic '60s quartet formation, brimming with full-bodied horn work and assertive percussion. The leader penned seven of the 10 tunes and brought along three different horns to blow his way through them. The album highlight is "Summon The Elders," an explosive statement full of dramati ...

Chicago Reader (Peter Margasak)
Saxophonist John Wojciechowski moved to the area from his native Detroit in 2002, following his wife, who landed an advertising job. He eventually settled in Bartlett and began a full-time gig as a high school music teacher. Since then he's made the 30-minute commute into the city countless times, slowly and steadily integrating himself into the st ...

Chicago Tribune (Howard Reich)
The kids who study music at St. Charles North High School may not realize how fortunate they are. For their teacher/bandleader happens to be one of Chicago's more commanding saxophonists, an artist who surely could build a full-time international career performing, if he so chose. When I first heard John Wojciechowski, at the Thelonious Monk In ...

All About Jazz (Dan Bilawsky)
Every now and then you encounter a musician who has it together in so many ways, yet has largely managed to avoid national recognition. Saxophonist John Wojciechowski is one such player. While those with strong enough memories might recall that the Michigan-bred Wojciechowski took third place - behind Jon Gordon and Jimmy Greene - at the 1996 T ...

Jazz Weekly (George W. Harris)
John Wojciechowski plays soprano, alto and tenor saxes as he leads a post bop team of Ryan Cohan/p-key, Dennis Carroll/b and Dana Hall/dr through a mix of originals and standards. His tenor sound has an autumnal Coltrane tone to it, be it on the gently melodic "Focus" or the dramatic and aggressive workout with Hall on an unorthodoxly outside "In Y ...

WTJU - Richmond (Dave Rogers)
Saxophonist Wojciechowski (performing musician/composer/high school teacher) leads the life of the title of one of his compositions, "Divided Man" and comments that he feels his dual role is reflected in the tone and tempo shifts of several of his compositions and performances. His quartet is completed by Ryan Cohen (keys), Dennis Carroll (bass) an ...

Jazzmozaiek (Belgium) (Georges Tonla Briquet)
Saxophonist John Wojciechowski's been active on the jazz scene in Chicago for nearly a decade. On hearing this CD, the immediate question is why he has remained under the radar outside of the "Windy City" for so long. The opening track from his second album was an instant hit. Balanced elaborated, saxophone solo in the right place, perfectly dos ...