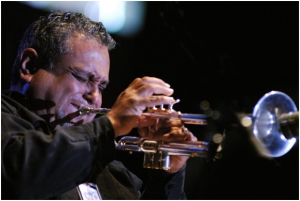 Ray has now established himself as one of the innovators of the international Jazz and Latin music scenes. A multi-talented trumpeter, percussionist, composer, and arranger, he presents Jazz from a refreshingly original and contemporary perspective. His two recordings on the Concord Picante label, his self-titled debut "Ray Vega", and "Boperation", along with his 1st release on the Palmetto label "Pa'lante"have been well received by critics, audiences and musicians alike. Vega's 2nd Palmetto CD "Squeeze, Squeeze" has also received critical acclaim including Four Stars in Down Beat Magazine.

The Ray Vega Latin Jazz Quintet presents fiery Latin Jazz from a Nuyorican perspective, while his quartet focuses on straight ahead swinging Jazz.

A much in-demand musician, he has performed with Mongo Santamaria with whom he recorded numerous CD's, Mario Bauza's Afro Cuban Jazz Orchestra, including their first-ever European tour, and Ray Barretto and the New World Spirit. Vega was privileged to record three projects with this landmark group including the Grammy nominated "Taboo" and "Contact". It w as during his time with Barretto that Vega was called upon to join the Tito Puente Latin Jazz Orchestra as lead trumpeter. Vega recorded with Puente's Orchestra many times over including the Grammy winning "Mambo Birdland", "Dancemania '99" and "Obra Maestra".