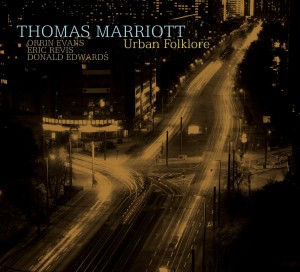 Thomas Marriott's trumpet sound is as lush and inviting as it comes.
- Downbeat Magazine

For his ninth album as a leader, trumpeter Thomas Marriott presents a musical collection of personal, yet commonly shared stories of frustrations, fears, hopes and joys. Music has always been about story-telling and with Urban Folklore, Marriott spins his tales of modern day society and life in our present times with intensity, humor and nuance. Performing with one of the most intuitive and in-the-moment piano trios in jazz - pianist Orrin Evans, bassist Eric Revis and drummer Donald Edwards - Marriott creates a powerful new statement on life and the human condition.

Music Life and Times (Travis Rogers, Jr.)
Thomas Marriott has released his ninth album as a leader with the October 21, 2014 Origin Records release of Urban Folklore. He has joined with one of the most expressive and talented trios around in the persons of Orrin Evans on piano, Eric Revis on bass and Donald Edwards on drums. They are deliberate and delicate and thoroughly brilliant. In fac ...

Midwest Record (Chris Spector)
It’s funny how you have to read the liner notes to understand how this instrumental jazz can pack in so much politics and observation on the human condition without any vocals. The joys of impressionistic music. Before getting down to the diatribes, the trumpeter hooks up with Orrin Evans piano trio and the sparks fly, maybe because the players u ...

All About Jazz (Mark Corroto)
Nothing has hit quite as hard as recent music from the trio of pianist Orrin Evans, bassist Eric Revis and Drummer Donald Edwards. The three musicians seek out (or probably are sought by) collaborators of equal weight and energy. It is not surprising that this recording of nine compositions, led by trumpeter and Seattle native Thomas Marriott, is a ...

Earshot Jazz (Andrew Luthringer)
“The job of a musician is to illustrate the human condition.” On his latest album, ace trumpeter Thomas Marriott lays out his musical ethos. Marriott conceived the nine original tunes on Urban Folklore as musical story-telling, evocations of shared human experience. While knowing the underpinnings behind Marriott’s musical concepts may de ...

JazzTimes (Thomas Conrad)
Editorial Pick Thomas Marriott would be better known if he had stayed in New York, where he was a respected trumpet player on the scene in the early years of the new millennium. Instead, for quality-of-life reasons, he returned to his hometown of Seattle, where he has assembled a substantial body of work on the local label, Origin. Marriott usuall ...

Jazzenzo (Netherlands) (David Cohen)
A deserted intersection in nocturnal Seattle, and on the back, a trumpeter blowing in the dark on the pavement. The content of Thomas Marriott’s “Urban Folklore” is less somber than the album cover leads one to suspect. From beginning to end, the quartet provides the American trumpeter with swift, great-sounding straight ahead jazz. In the ...

improvijazzation (Rotcod Zzaj)
If they’d had music like this in the ‘burbs I grew up in, I wouldn’t have had to search far & wide for “cool”…. Thomas’s penetrating trumpet work on tunes like the fantastic opener, “Apophis“, are definitely the stuff of jazz legend… his choice of Orrin Evans on piano, Eric Revis on bass & Donald Edwards on drums shows total tal ...

All About Jazz - Italia (Stefano Merighi)
The quartet of Thomas Marriott in question is a beautiful synthesis of American jazz: Marriott Seattle, Eric Revis Californian, Orrin Evans heir to the school of Philadelphia, finally Donald Edwards from New Orleans. But the sources do not affect that much an ecumenical music, which lives on technical brilliance, on an "esperanto" if little jazz ...

Jazz Scan (Ric Bang)
Origin Records and trumpeter Thomas Marriott are among this blog's "old friends"; both were featured in some of my earliest reviews. If you scan through the site's listing you'll find 7 CDs where they're featured together. Origin was among the first of the "new breed" jazz labels founded in the very late 20th century, and Marriott was - and sti ...