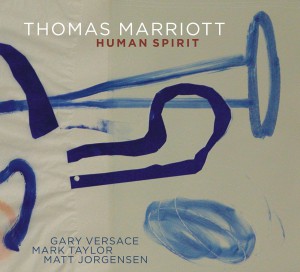 One of the best trumpet players in the world.
-Thomas Conrad

From the first track, it is apparent that Marriott belongs to a select group of elite trumpet players capable of the speed & precision, tonal purity, and advanced logic displayed on an uptempo take of "You Don't Know What Love Is." Along with the wildly creative organist Gary Versace, drummer Matt Jorgensen, and saxophonist Mark Taylor, he explores that classic along with a haunting "Low Key Lightly" by Duke Ellington and Miles Davis' "The Brown Hornet," to complement several originals. Marriott again assembles another finely crafted recording, full of swing, heart, and surprises.

AllAboutJazz.com (C. Michael Bailey)
Human Spirit is trumpeter Thomas Marriott's seventh critically well-received recording for the West Coast Origin Records label. Marriott shakes things up by using an organ trio format as his vehicle, to quite great effect. Marriott and his merry Origin Records band pushes forth the definition of the "new" West Coast jazz, while at the same time giv ...

Jazz Society of Oregon (George Fendel)
I hope the people of Seattle are hip to the brilliance of Marriott. He plays with complete ease at the most brisk of tempos and displays the gift of a beautiful, pure tone. Along with Mark Taylor, alto saxophone, Gary Versace, B-3 organ, and Matt Jorgensen, drums, Marriott gets this CD off to a flying start on an up-tempo "You Don't Know What Love ...

Audiophile Audition (Jeff Krow)
We've been covering Thomas Marriott since his third CD back in 2007. Last June, he showed that he could more than hold his own when matched with Ray Vega in a trumpet fest. He has been featured as a lead sideman on many of his label mate's CDs. His rise as a first choice trumpeter has been steady, almost meteoric. His latest CD for Origin is ...

All Music Guide (Adam Greenberg)
Trumpeter Thomas Marriott has always been one of the brightest stars in the Origin Records stables, and his Human Spirit album wanders through extremities of both speed and composition before it's through. This is a rare album that showcases all of the players at their highest levels, in both solo formats and intertwined. Marriott and saxophonist M ...

Cadence (Larry Hollis)
A younger Hammond practitioner is present in Gary Versace on 'Human Spirit'. Trumpeter Thomas Marriott apparently has been a busy beaver of late. His release 'Constraints and Liberations' (with Versace on piano) was covered last issue (Apr/May/June 2011, p.225) and he and Taylor were both on 'Flash Point' (same issue, p.126) by Randy Halberstadt, ...