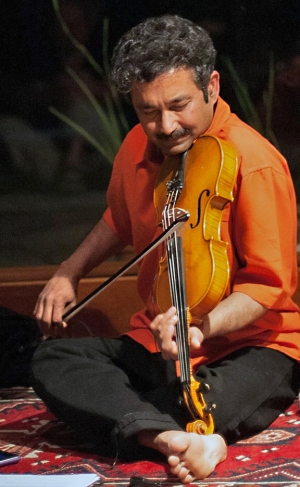 In Purna's exotic and highly original improvisations one hears not only the sounds of genuine Indian classical, but also the roots of jazz and contemporary western classical...amazingly shocking and shockingly amazing virtuosity.
Gregory Sandomirsky, Kansas City Symphony

Purnaprajna Bangere (Purna) is from Mysore in southern India. He hails from a family of Indian classical music lovers. His parents recognized his interest in music and initiated vocal music lessons with Sri. T.R. Srinivasan when he was around 7 years old. He had his first violin lessons under the loving guidance of Smt. Seetha Lakshmi and Smt. Jayamma. He also had a short stint with Vid. A. D. Zachariah.

Sri. T. R. Srinivasan identified Purna's passion for the violin when he was about 13 years old and took him to Vid. Sri H.K Narasimha Murthy affectionately called as HKN. Here began the rigorous training in violin for many years to come. Purna is the first disciple in a long line of disciples of his teacher.

HKN's teaching method was well rounded; he gently insisted on a harmonious blend of technical skill and musical aesthetics. Purna's daily training included practicing complex scales of the Parur System developed by Vid. Parur Sundaram Iyer, father of the legendary Indian musician Vid. M.S. Gopalakrishnan and his illustrious elder brother Vid. M. S. Anantharaman. Then there would be the practice of the varnams in 3 in different speeds in multiple bowing and fingering techniques of the Parur system. Many a time each varnam would last for 45 minutes or more. HKN not only taught the techniques of the Parur school to his students, he inculcated in them an abiding virtue of practice. He constantly inspired his students by telling inspirational stories of Sri MSG and his violin playing. This was an important part of the regimen.

Perfection was the key word. How to achieve it as much as possible through practice and what it takes to practice correctly were the fundamental lessons Purna learnt from his great teacher during early years. HKN's deep insights into music and musical education were a crucial element of the pedagogy.

An epitome of humility, HKN's teaching method was gentle yet firm, generally speaking. He would not impose ideology of any kind; his training was a blend of scientific method and artistic sensitivity. At the advanced level, he had a particular genius to recognize and tailor his teaching to the particular aptitude and strengths of the disciple. In Purna, he recognized the passion and aptitude for the solo violin techniques of the Parur School, an inclination for virtuoso techniques and manodharma sangeetha (improvisational aspects) and guided him accordingly. With the deep encouragement and guidance of Vid HKN, the meticulous practice went on for the next several years. Purna regularly consults with his teacher on a weekly basis to this day.

Purna expresses his heartfelt gratitude, special thanks and love to Rajalakshmi Madam (HKN's wife) and Flute Vidwan A. V. Prakash for their guidance and encouragement on numerous occasions. Rajalakshmi Madam has been as constant a presence in his musical life as his guru HKN. Without the constant support and love from his parents B. S. Panduranga Rao and Sunanda Rao, nothing would be possible, he wants to express his love and gratitude to them.

Purna follows the Parur system of playing very closely. He was recently featured in the prestigious Learn Quest Academy of Music annual music festival held in Boston. Purna frequently gives concerts across the U.S. and India and Europe.