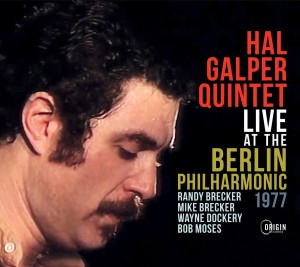 Captured during a pivotal, trailblazing period of his five decade career, pianist Hal Galper had come off the road with the Cannonball Adderley Quintet looking to establish his new working band. Pulling in Michael & Randy Brecker, whom he had recorded & worked with in the early '70s, along with bassist Wayne Dockery and drummer Bob Moses, Galper set up Sunday matinees at NY's Sweet Basil jazz club for a year to woodshed the group concept and new compositions. In the studio, 1977's "Reach Out" displayed an astonishingly original collective, all matching Galper's chance-taking, high-spirited, free-wheeling approach to music making. 1979's "Speak with a Single Voice" captured the energy of the quintet live, but on this 1977 Berlin Jazz Festival performance, the band shifts into an other-worldly overdrive. From the opening salvos of Galper's "Now Hear This," the mission is defined - jazz giants, in the prime of their youth, set free to blow, pushed to the limits by Galper's facility, full-bodied sound, and fertile imagination.

Reviews of Live at the Berlin Philharmonic, 1977

Midwest Record (Chris Spector)
One of the great you wish you were there moments is finally getting it's long over due release, this live date finds Galper fresh off the road from three years with Cannonball Adderley now fronting a band with the Brecker Brothers blowing away. With echoes of Miles in the air, along with a finger pounding that could only have led to early arthriti ...

All About Jazz (Dan McClenaghan)
4-STARS It must be gratifying to accomplish everything you set out to do. Pianist Hal Galper says he has done just that. And, after a career that included work with trumpeter Chet Baker and saxophonists Cannonball Adderley and Stan Getz, along with a ten year stint in saxophonist Phil Woods' band (1980-1990), followed by ten years of touring and r ...

Jazz'halo (Belgium) (Georges Tonla Briquet)
A nostalgic dip with nostalgia for a vibrant live concert? Then this 'Live At The Berlin Philharmonic' is a recommended remedy. Recorded in 1977 with the legendary brothers Michael and Randy Brecker on the front line along with pianist Hal Galper, bassist Wayne Dockery and drummer Bob Moses. Galper, at the time sidekick to Dave Holland and Lee K ...

Jazz Weekly (George W Harris)
In 1977, studio guys like Hal Galper, Mike Brecker and Randy Brecker were able to make good bucks as studio musicians. Galper just got off doing a stint with Cannonball Adderley and teamed up with the Brecker Brothers, bassist Wayne Docker and drummer Bob Moses to set up ship in NYC's Sweet Basil for a year to work on their own songbook. What came ...

Cadence (Don Lerman)
It is certainly good news for jazz listeners that Origin Records has released ten of Hal Galper's past recordings as a leader, including this live concert from 1977 recorded in Berlin's symphony hall and released as (3) in 2021 as a two CD set. This concert, occurring in Galper's life chronology between extended stays with Cannonball Adderley (1973 ...

Downbeat (Herb Boyd)
5-STARS "Live" is the operative word of Hal Galper Quintet's Live At The Berlin Philharmonic, 1977. No matter what track you choose, the results are the same—exhilarating. Pianist Galper's dazzling runs are often complemented by his punchy pointillism, and this is particularly engrossing on "I'll Never Stop Loving You." Galper alone is stunning ...

Music Frames (Netherlands) (Mattie Poels)
Live at the Berlin Philharmonic is the double CD, recently released by the magical American pianist Hal Galper with his quintet. It's fantastic that a label like Origin Records re-releases old recordings. Recordings that are timeless and sound unparalleled and contemporary even after more than 40 years. This is also the case with the 1977 concer ...

Jazz N More (Switzerland) (Georg Modestin)
Born in 1938, he has remained a "musicians' musician" despite a long career as an instrumentalist, band leader, composer, arranger and teacher. He was a member of the Cannonball Adderley quintet for almost three years, followed by a further ten in that of Phil Woods. In the second half of the 1970s he himself headed a band whose line-up is easy to ...

JazzdaGama (Raul da Gama)
There can hardly be a better occasion to celebrate the unfettered energy of "live" music than this 1977 performance of the Hal Galper Quintet. In fact, it would never be hyperbolic to suggest that it stands out as one of the greatest "live" performances by a group of musicians…ever. It is dark – beautifully so – and the music takes you to ano ...

BeBop Spoken Here (UK) (Lance Liddle)
Six tracks - the shortest at 9:31, the longest at 24:36 - spread over two CDs recorded live at the Berlin Philharmonic in 1977 gave me the feeling of being there. This feeling helped on by the audience's enthusiasm. If Michael Brecker had blown these choruses at a JATP concert 30 years earlier he'd have been accused of exhibitionism or playing to ...

Jazzwise (UK) (Brian Priestley)
4-STARS At one point, Galper was in danger of being recognised more as an educator than a pianist, although a couple of recent sessions for Origin should have put paid to that. Similarly, this archive release is a strong reminder that post-bop was alive and well in the 1970s. The hard-driving and enthusiastically-received set is reminiscent of ...

BBC Music Magazine (Editor)
5-STARS This two-disc release has come about as a result of Galper sifting through his archives a couple years ago. It was a session well worth rescuing. Although dating back 44 years, it recalls when Galper was already established as a highly-regarded player, almost part of the jazz-scene furniture and thus sometimes unfairly overlooked. This con ...

Jazz Journal (UK) (Derek Ansell)
1977 was not a good year for jazz; progressive rock, heavy metal and other popular sounds were everywhere, and jazz musicians were mainly involved in playing a hybrid music with electronic instruments and a rock beat. Galper himself played electric piano in the Cannonball Adderley band but he returned to an all-acoustic line up and a hard-bop, prog ...

Cirdec Songs (Cedric Hendrix)
This record can really be summed up in two words: IN-SANE!!! Not only is Hal Galper an amazing pianist with a raw aggressive tone one might compare to Keith Jarrett, but his inclusion of the legendary Brecker brothers (Randy on trumpet and flugelhorn and Michael on tenor sax) was nothing short of inspired. Everyone is given an equal chance to shine ...

The Answer is in the Beat (WCBN) (Paul Simpson)
Alright, so here's a previously unreleased live set performed by a bunch of artists I should probably be more familiar with. This concert was recorded after Galper had just finished a tour with Cannonball Adderley, and he's joined by Randy and Mike Brecker, Wayne Dockery, and Bob Moses. All six songs are around 10-25 minutes each, and all five musi ...

Jazz Views (UK) (Jack Kenny)
Strange to think that the music on this album was recorded forty-four years ago. It does not seem like that: it has a freshness and immediacy. Pianist Hal Galper played for three years with Chet Baker. He also had a spell with Cannonball Adderley and Phil Woods. The group on this album was probably his most successful and most artistically sat ...

Multikulti Project (Poland) (Mateusz Krępski)
5-STARS We are on November 4, 1977, the building of the Berlin Philharmonic, which hosted the most important German jazz festival - Berliner Jazztage. There are six long tracks on two discs, the shortest of which is 9:31, the longest 24:36. With one exception ("I'll Never Stop Loving You"), they're all by the leader. On stage, the quintet of the ... 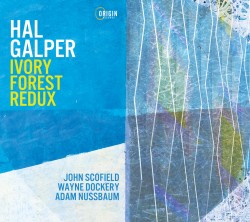 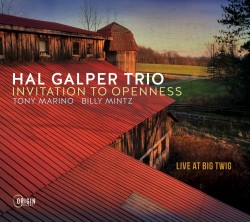