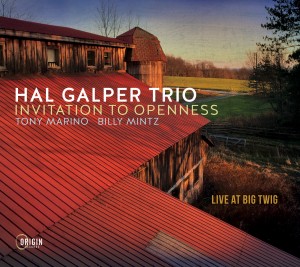 ...a work of true artistic mastery, and generational significance. In many ways, it personifies the direction of jazz music into the 21st century, a mantle to be grasped and moved forward by generation next.
ALL ABOUT JAZZ

Disbanding his hard-touring trio in 2000 after a productive decade, pianist Hal Galper returned to "the shed" to work on concepts that would lead to an indomitable period of innovation from 2006 to 2020, remarkably occurring a half century into his career. Enabled by his association with bassist Tony Marino and drummer Billy Mintz, Galper pursued a rubato approach to time and movement, documented first on Agents of Change in 2006, and then through his ground-breaking recordings & tours from 2007-2020 with bassist Jeff Johnson and drummer John Bishop. This 2008 album with the Agents of Change trio from early in the rubato period was recorded live for WJFF Radio in Sullivan County, NY, and reflects a time and place in Galper's career where he was becoming supremely certain with his musical voice and comfortable with his gradual shift to being a member of the rich cultural community in the Catskills. After decades on the road and in New York City, Galper is happily ensconced in the hills, and 14 years since this recording he's again performing weekly with Marino & Mintz up near his home.

Reviews of Invitation to Openness

Midwest Record (Chris Spector)
Originally a 2008 radio concert, when Galper was entering the final phase of his long career that's still in motion, he unleashed his piano into a kind of free jazz where he was improvising on composed music as the urge struck him in each different moment. Proceeding on a full blown busman's holiday of letting the whims blow where they will, it's ...

All About Jazz (Dan McClenaghan)
4-STAR Pianist Hal Galper turned away from the life of touring in 2000, and eased into "the shed," to work on some innovative ideas that would change the shape of the piano trio. Rubato is where he went—a style of playing that stretches time, making it flexible, unpredictable and free. It takes special trio mates to assist in this, and he found ...

Jazz Weekly (George W Harris)
Veteran pianist Hal Galper is teamed with like minded mates Billy Mintz/dr and Tony Marino/b for a 2008 "live in studio" session. Galper's touch is classy on his intro to a glowing "Embraceable You" that has the bassist pop the clutch and change gears to turn into a romp, while the leader keeps the current steady for is opening for the flavorful "A ...

Take Effect (Tom Haugen)
The pianist Hal Galper is joined by Tony Marino on bass and Billy Mintz behind the drum kit for these 8 live tracks performed at Big Twig way back in 2008. "Embraceable You" opens the listen with Galper's warm and fluid keys alongside playful drumming and strategic bass, and "Rapunzel's Luncheonette" follows with a very dynamic and swift approa ...

Tracce Di Jazz (Italy) (Arturo Pepe)
Hal Galper , born in 1938, is one of the great keyboard lions still in business, although he has limited performances, he continues to carry the sacred flame of jazz as an educator, being a Master who does not spare himself (the network is full of extracts from his masterclass) and who has also been able to make an important contribution in music p ...