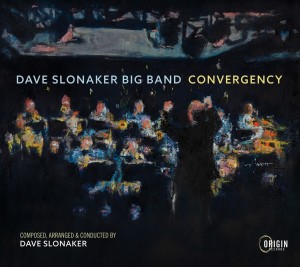 Convergency gives me the same kick that I got from when I first heard the big bands of Boyd Raeburn, Stan Kenton, Dizzy, Woody, Gil, Thad and Mel and yes, even the great Ms Schneider. Slonaker is up there with them.
BeBop Spoken Here

The Dave Slonaker Big Band, coming off its 2013 Grammy® nomination for Best Large Jazz Ensemble, returns with a dazzling collection of new music celebrating the tradition, but also pushing the possibilities of big band jazz. Featuring an all-star cast of West Coast jazz and studio legends including Bob Sheppard, Larry Koonse, Peter Erskine, Wayne Bergeron, and so many more, Convergency brings together the lives, stories and extraordinary talents of these great musicians, with the music of veteran Los Angeles composer/arranger Dave Slonaker, to create what will certainly be another touchstone recording for fans of the large jazz ensemble tradition.

The Jazz Owl (Travis Rogers, Jr.)
After the massive success of his 2013 debut album, Intranda, Dave Slonaker perceived the time to be ripe for a new era of Big Band music. His new album, Convergency, is the brilliant and much-anticipated follow-up. Performing Slonaker's originals are a fantastic collection of favorite artists like Larry Koonse on guitar, Bob Sheppard on alto and ...

Midwest Record (Chris Spector)
When a commercial musician gets the chance to show us where his heart is, something special can really come out of it. A well decorated Hollywood studio rat finally comes out with his second album a decade later and this should be a fellow Grammy nominee as well. With players he's known for up to 40 years staffing this big band, his charts are imma ...

All About Jazz (Troy Dostert)
4-STARS Composer/conductor Dave Slonaker probably won't qualify as "prolific," at least based on recorded output alone, as he spends a lot of his time behind the scenes in film and television work—but one must appreciate the level of craftsmanship that he brings to his big band projects. His debut release, Intrada (Origin Records, 2014), receive ...

BeBop Spoken Here (Lance Liddle)
One of the best big band albums I've heard in many a long day's listening. Convergency gives me the same kick that I got from when I first heard the big bands of Boyd Raeburn, Stan Kenton, Dizzy, Woody, Gil, Thad and Mel and yes, even the great Ms Schneider. Slonaker is up there with them. The big band era as it once was may be gone inasmuch as ...

Jazz Weekly (George W Harris)
Big band leader Dave Slonaker brings together a collection of some of the West Coast's top session studs to interpret his charts and tunes on this collection of mostly originals. The only cover is a velvety rendition of "I Had The Craziest Dream" that gives trumpeter Wayne Bergeron a chance to give a rich aria. Many of the tunes have an Aaron Copla ...

JW Vibe (Jonathan Widran)
It's been almost ten years since the Dave Slonaker Big Band earned a Best Large Jazz Ensemble Grammy for their critically acclaimed debut album Intrada – but the extreme amount of time between that classic and the group's latest Convergency is understandable. When he's not writing, arranging and conducting his tuneful, vibrant and swinging co ...

All About Jazz (Jack Bowers)
5-STARS While big-band albums generally differ, sometimes widely, in tone and temperament, there are definitive criteria by which every one may be evaluated—arrangements, performers, sound quality, sequencing and, above all, the elusive but imperative swing quotient. Dave Slonaker checks all those boxes and more on Convergency, a superlative su ...

RootsTime (Belgium) (Jan van Leersum)
Composer/arranger Dave Slonaker believes we are living in a new golden age for big bands and given the success of his 2013 debut album "Intrada" he is probably right. Not only was the album nominated for a Grammy for Best Large Jazz Ensemble album but it also received excellent reviews. Slonaker's music is contemporary in the best sense of the word ...

All About Jazz (Richard J Salvucci)
In December 1910, Virginia Woolf once observed, human character changed and, along with it, so did everything else. Politics, society, religion, sex, all of it, she thought, would leave the ancien regime behind. And, to a point, she was correct. Within a few years, the old world was gone, swept away by war and revolution. It was not coming back. Ev ...