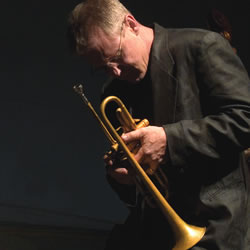 Clay Jenkins' career as a jazz artist has covered a wide range of musical experiences. He attended The University of North Texas (then named North Texas State University) where he earned his Bachelor's Degree in Music Theory and studied trumpet with John Haynie.

Clay moved to Los Angeles in 1978, where he continued playing in live performances and in studio recording sessions. He also studied with the renowned trumpet teacher, James Stamp for the next two years. From Los Angeles, he toured with the big bands of Harry James, Buddy Rich, and finally, the Count Basie Orchestra.

Clay earned his Master's Degree in Jazz Studies from The University of Southern California in 1993, studying trumpet with Boyde Hood. Clay began teaching at several schools, including The Foundation for the Junior Blind, The University of Southern California, California State University at Northridge, and The California Institute of the Arts. He also served as Chairman of the Music Theory Department at the Colburn School of Performing Arts from 1988 through the summer of 2000, and co-authored the theory textbook being used there and in other schools. His duties also include being on the staff of several Jim Widner Summer Jazz Camps.

Currently, Clay is an Associate Professor of Jazz Trumpet at the Eastman School of Music in Rochester, N.Y. He also continues to be a very active performing and recording artist. He has performed and presented clinics all over the United States and Canada, and also abroad in Japan, Italy, Korea, Germany, Portugal, Russia, and South Africa. He is a charter member of the trumpet section of the Clayton/Hamilton Jazz Orchestra (which has included trumpet artists Snooky Young, Bobby Bryant, Chuck Findley, Oscar Brashear, Byron Stripling, Bijon Watson, Bobby Rodriguez, and Charlie Davis). The C.H.J.O. was the Jazz Orchestra in Residence at the Hollywood Bowl from 1999-2001.

Clay plays the New French Besson trumpet, produced by Boosey and Hawkes, Inc. and represents this company as a performing artist.