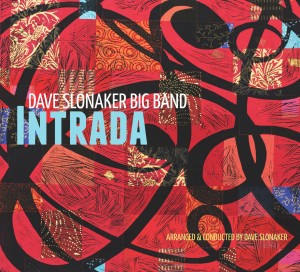 The best of big band music incorporates tight harmonies, is propelled by punchy rhythms, and offers lyrical solo beauty, and that's all to be found in Intrada. No wonder the disc has just been awarded a Grammy nomination as best large jazz ensemble album.
Rochester Democrat & Chronicle

Though rooted firmly in the tradition of big band jazz, Dave Slonaker's Los Angeles-based Big Band looks toward the future of large ensemble jazz in this set of dynamic modern original compositions and arrangements. The band features an all-star cast of jazz and studio greats including Peter Erskine, Wayne Bergeron, Clay Jenkins, Bob Shepard, and Bill Reichenbach. An arranger and orchestrator for many Hollywood composers, Slonaker has credits on dozens of films and TV shows, and his works have been performed by the Count Basie, Clark Terry, and Woody Herman Bands.

Midwest Record (Chris Spector)
A throwback to the glory days of arrangers, Slonaker is a cat working in the shadows of Hollywood composing and arranging for loads of shows and movies that you wouldn't know he had a hand in unless you hang around for the credits, in small type. A dynamic set with a big band populated by the crime of contemporary jazz, this is one of those sets ...

Oregon Jazz Scene (George Fendel)
When I hear a big band playing nearly all original material, I'm looking for intricacy, creative arrangements, scintillating solos and melody lines that don't enter the land of confusion. And that's just what we have in this Los Angeles gathering of undoubtedly some of the finest players in Smogville. Oddly, the only standard in the set is "It ...

Jazz Weekly (George W. Harris)
Dave Slonaker fronts a big band in which he does almost all of the composing, arranging and conducting. No small job when you consider the band has a reed section that includes Bob Sheppard and Brian Scanlon, a trumpet section with Wayne Bergeron, Clay Jenkins and Ron Stout, a trombone section with Bob McChesney and a rhythm team with Peter Erskin ...

Cadence (Larry Hollis)
Subtitled arranged and conducted by Dave Slonaker it harkens back to the days when the large group was as much an arrangers vehicle as it was the designated leaders. Peopled by some instantly recognizable names such as Peter Erskine, Bob Shepard, Wayne Bergeron, Clay Jenkins and Bill Reichenbach this organization has "left coast jazz" written all ...

Rochester Democrat & Chronicle (Jack Garner)
Big band, that rare and especially challenging and wonderfully rewarding form of jazz, gets a grand shot in the arm with this outing from noted jazz and film composer and arranger Dave Slonaker. Intrada features nine original tracks, and a sprightly take on "It's Only a Paper Moon." All 10 songs are given invigorating and creative arrangements a ...

All About Jazz (Jack Bowers)
Don't be put off by the name. Intrada, composer / arranger Dave Slonaker points out, is "a musical form often composed as a prelude, overture or fanfare," one whose upbeat phrases give rise to an exhilarating curtain-raiser on Slonaker's initial big-band recording. Rest assured this is a world-class ensemble and there's no doubt whose steady h ...

Jazz Scan (Ric Bang)
Oh, how I miss the big bands! And, as a result, how grateful I am for releases such as this one from Dave Slonaker, who feel the same emptiness, and occasionally fill it with great "temporary" groups. Unless you're part of the musical world, Slonaker probably isn't on your jazz scope. But if you're a movie or television fan, you've been exposed ...