Truth And Reconciliation is out of this world!
Eric Cohen, WAER

Critically acclaimed pianist/composer Darrell Grant (Betty Carter, Tony Williams, Roy Haynes, Greg Osby) describes his 6th CD as a leader as his "dream project." The 2-disc set joins Grant with bassist John Patitucci and drummer Brian Blade, and features guest appearances by Grammy-winning guitarist Bill Frisell, vibraphonist Joe Locke, saxophonist Steve Wilson, and guitarist Adam Rogers.
Grounded in jazz, Truth and Reconciliation brings together influences ranging from classical to folk and soul. In addition to showcasing the masterful piano artistry that took Grant's 5 previous albums to the top of the radio charts, and earned his debut "Black Art" a selection as one of the Top 10 CD's of 1994 by the New York Times, Truth and Reconciliation highlights his unique voice as a composer on the album's 9 originals; and features deeply personal re-workings of jazz tunes - Dizzy Gillespie's "Algo Bueno," Betty Carter's "Tight," the Jerome Kern classic "The Way You Look Tonight," pop anthems - Sheryl Crow's "I Shall Believe," and Sting's "King of Pain," as well as showcasing Grant's vocals, which are reminiscent of Keb Mo and Milton Nascimento. Into this mix Grant masterfully weaves archival spoken word excerpts from historical figures like Gandhi, JFK, FDR, Mandela and Martin Luther King Jr.
Inspired by Grant's own reflections on artistic truth, and profoundly influenced by his study of the struggle for justice and healing in South Africa, Truth and Reconciliation seamlessly dances between piano trio, quartet, quintet, and vocal settings, paying homage to mentors, honoring truth tellers, and celebrating beauty. It is a definitive statement by a definitive artist.

Reviews of Truth And Reconciliation

Midwest Record Recap (Chris Spector)
Double disc jazz vocal outing rounds up some serious progressive players for a set that mixes jazz, art, politics and more. The kind of set someone like Goddard Lieberson might subsidize in the past, this is now firmly the kind of indy set that has to be indie all the way. It takes a special taste to appreciate great music backed with deep meanin ...

Audiophile Audition (John Henry)
Another jazz project with a strong message, the sixth album with the noted pianist/composer leading concentrates on honoring the dismantling of apartheid in South Africa. Grant - who has worked with Betty Carter, Tony Williams and Roy Haynes - calls this double disc his dream project. He has assembled some top sidemen and varies the 16 tracks among ...

All About Jazz.com (Dan McClenaghan)
Pianist/composer Darrell Grant's Truth and Reconciliation might be categorized as "music to make the world a better place." A strong case could be made that all music -- indeed, all art -- has that purpose. Grant's aspirations in that direction here are more on-the-sleeve than you find on most musical endeavors. The results on the project are remar ...

Primetime A & E, May 2007 (Nick's Picks)
As an accomplished New York sideman for many years, pianist Grant bounced around the scene, and the country, releasing small group CDs along the way for Verve and the defunct 32 Jazz labels. After a self-imposed sabbatical, Grant returns with Truth and Reconciliation, a well-recorded CD of sturdy originals and covers that enlist top-flight players ...

Coda (Bill Barton)
Pianist-composer Darrell Grant has assembled an impressive group here. The core trio has John Patitucci on bass and Brian Blade on drums. Also appearing are guitarists Bill Frisell and Adam Rogers, vibraphonist Joe Locke and saxophonist Steve Wilson. Grant's Truth and Reconciliation Project "was inspired by my own search for artistic truth, the ...

Jazz Review (Glenn Astarita)
Other than the jazz-superstar accompaniment he receives, pianist/composer and educator Darrell Grant injects a personalized spin, rooted with a distinct musical aura that pervades throughout this 2-disc set. Even on the up-tempo numbers, Grant instills a macrobiotic sense of being into these clear-sighted progressive jazz works. In effect, his mu ...

Bopn' Dicks 10 picks June 2007 (Dick Crockett)
Darrell Grant is a student of jazz, of life and multiple incarnations, a professor, a side man and scholarly to aspiring to young jazz musicians, which means there's a process at work, from an evolving artist of multiple musical styles to an eventual teacher to spread the word, the joy, to play jazz. Grant has developed that purpose from experience ...

The Oregonian - May 27, 2007 (Lynn Darroch)
Darrell Grant strides into a ragtag band room where students have assembled for a beginning jazz combo class. Chairs and music stands are scattered around a piano and drum set, where Grant keeps the beat as they struggle with a tricky Herbie Hancock tune. Through frequent breakdowns, he guides them patiently. The floor is covered with green lino ...

All Music Guide (Steve Leggett)
Pianist Darrell Grant showcases some of neo-bop's strengths on this ambitious two-disc set from Origin Records. Looking back to the bop era for inspiration, Grant also astutely mixes in classical elements, folk themes, flirts with light R&B, and walks surely and boldly into pop territory, all through a bop lens from the vantage point of the 21st ce ...

Columbia Tribune / Columbia, Missouri (JON W. POSES)
Pianist Darrell Grant has carved out a worldwide trail from his Pacific Northwest base of operations. His latest release is "Truth and Reconciliation," a two-disc effort that is as honest and earnest as ever. If you ever cross paths with him, he will strike you as a gentle soul - and his musical approach tends to reflect that as well as fluidity. O ...

Pittsburgh Tribune Review (Bob Karlovits)
This two-CD album has a curious event it calls a "reprise." The first disc by this marvelous pianist and an equally strong group ends with a version of Sting's "King of Pain" that sounds unfinished. The second disc begins with more "King of Pain." It seems like a runover on a newspaper story. Really, a little editing could have produced one version ...

Rokovoko zine - online (Alexander C. Kafka)
Formerly a pianist with singer Betty Carter, Grant dipped for a while with Verve-Forecast into funk and worldbeat. Now a professor on the jazz faculty at Portland State, he offers here a lesson in how to interlace not just genres, but politics and music, in a way that's powerful rather than preachy. Working with a superb lineup--John Patitucci on b ...

Downbeat, September 2007 (Robert Doerschuk)
*** Patitucci is on board for Truth And Reconciliation, a mostly trio, two-disc set from pianist Darrell Grant. With Brian Blade on drums, the ambient master Bill Frisell popping up on guitar and vibes chilling the mix courtesy of Joe Locke, the mood is cool to medium up. Aside from "The Way You Look Tonight," on which Grant cultivates a Hornsby-l ...

Cadence (Marc Medwin)
Darrell Grant's latest certainly shares a level of reflection, but it's largely a less somber affair, opening with the down-right joyful title track. "Ubuntu" is a bit stealthier, but it has an infectious drums-and-bass groove that positively exudes good will. So does "Fils du Soleil," a dedication to Tony Williams whose funk whispers, due mainly t ...

JazzTimes (Thomas Conrad)
Darrell Grant has said, "I choose to believe in the power of humans to change the world ? I believe that we who create art possess an extraordinary power to communicate, inspire, provoke, inform and to move others to transform society." Truth and Reconciliation is an ambitious double album that attempts nothing less than putting the above beliefs ... 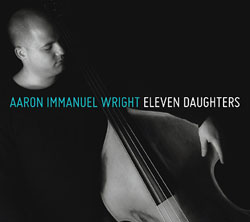