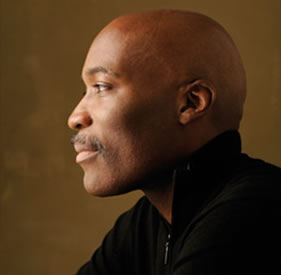 Darrell Grant, performer, composer and Portland State University professor, has built an international reputation as a stellar pianist and versatile musician. A gifted artist whose four previous recordings have topped jazz charts, Darrell explores the lyricism and soul of songs with beauty, joy and passion. He has appeared on major concert stages from the Weill Recital Hall at Carnegie Hall to the Monterey, Telluride and San Francisco Jazz Festivals. He has been a guest on Marian McPartland's "Piano Jazz" on NPR and toured internationally with many jazz legends.

Born in 1962 in Philadelphia, Grant moved to Denver, CO, as a young child. Starting piano lessons before his teens, Grant was enough of a prodigy that he joined the Boulder, CO-based Pearl Street Jazz Band, a young but internationally renowned traditional New Orleans-style combo, at the age of 15, touring worldwide with the group for two years. Grant won a scholarship to the Eastman School of Music in Rochester, NY, at the age of 17; while at Eastman, Grant focused on performance studies over theory, which he covered in his graduate studies in jazz theory and composition at the University of Miami.

Grant had moved to Portland in 1997 to accept a teaching post at the University of Oregon. Besides his duties as an educator, scholar, and bandleader, Grant also played piano in drummer Tony Williams' quintet and appears on numerous albums as a sideman.