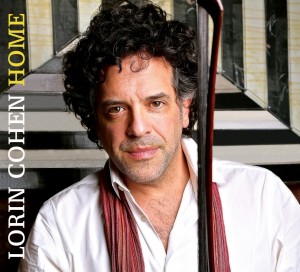 Gina Loves Jazz (Berlin) (Matthias Kirsch)
Bassist Lorin Cohen, born and raised in Chicago and currently living in New York, has toured extensively with the great Monty Alexander. And so it is only natural that the Caribbean also finds its way onto this diverse and exciting album. Lorin wanted to use mallet instruments for his eight compositions and he got an ace team of people surroundi ...

Midwest Record (Chris Spector)
The inventive bass ace steps out for his debut as a leader after providing the stuff for a wide range of stellar cats from all fields for quite a while. With restless music reflecting his restless urges that that have taken him around the world, Cohen delivers listener music for people that really want to hear something they can sit and soak up. Ta ...

Chicago Reader (Peter Margasak)
Though he's lived in New York since 2012, bassist Lorin Cohen reveals the modesty instilled by his Chicago upbringing on his recently released debut Home (Origin), playing with a soulful muscularity and helming his band's harmonic shapes and rhythmic thrust rather than trying to command center stage. Cohen understands what it takes to make a band s ...

Chicago Tribune (Howard Reich)
Until three years ago, when he moved to New York, bassist Lorin Cohen was ubiquitous in Chicago, playing in uncounted bands and far-flung musical styles. He returned here briefly over the weekend in the best way possible, celebrating the release of his first album as bandleader, "Home," the Green Mill packed on Friday night with his family, fr ...

All About Jazz (Dan Bilawsky)
4-STARS What's "home?" Is it where somebody's born and raised? Is it where a person resides at a given time? Or is it any place where an individual finds a high level of comfort, joy, and possibility? For Lorin Cohen, it's all three. This talented bassist-composer makes that fact plainly apparent on this, his leader debut. With Home, Cohe ...

Music Life & Times (Travis Rogers, Jr.)
You might remember Lorin Cohen as the bassist with the Hip-hop/Jazz group Vertikal You may certainly recall his sojourn with pianist Monty Alexander or with vibraphonist Joe Locke (who appears on this album). Now, however, Cohen has released his debut album in the role of leader, composing and arranging every track on the album "Home." And it is ce ...

Music Lounge - WDCB, Chicago (Paul Abella)
Former Chicago bassist Lorin Cohen has a new disc out from Origin Records called Home. First off, props to Cohen for some really outstanding arranging on this album. Cohen has created really nice "sonic palates" for his musicians to work with. And Cohen didn't take the easy way out, instrumentally speaking, either. Throughout Home, you'll hear ...

JazzWax (Marc Myers)
Lorin Cohen's bass serves as a big woody pulse on all of these original tracks, which he also arranged. The inclusion of Joe Locke's vibes gives the album a bright aura. Add Yvonnick Prene's harmonica and Victor Provost's steel pan, and your ear winds up having a wonderful time. What I love about Cohen's bass is the brightness, his time and lo ...

Improvijazzation Nation (Rotcod Zzaj)
Lorin's bass work is absolutely astounding on his debut performance as a leader! All-original compositions certainly contribute to the high-energy performances on all eight songs, but the BLUF is that this is just one oh-so-tight band that will catch your ears & hold them (for a long, LONG time to come)! Songs like the 5:32 opener, "Crossings", a ...