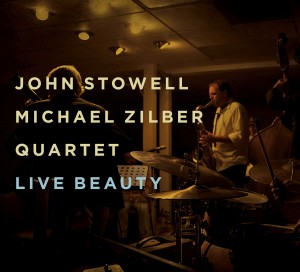 Recorded live at Berkeley's California Jazz Conservatory in 2012 at the end of a two-week tour, "Live Beauty" captures the lithe and dynamic Bay-Area quartet that John Stowell and Michael Zilber have co-led for the past 7 years. It well represents the effortless empathy and telepathy these four musicians have developed during that time. "...there's no mistaking Stowell's remarkable prowess and sensitivity on electric and acoustic guitars--or the fun he's having in this highly interactive setting." JazzTimes.

Midwest Record (Chris Spector)
A live date recorded at the end of a two week tour, the crew on board here developed the mental telepathy that it takes to make an improv date feel like it’s been well scripted to sound like the notes have been well laid out but the players are given the freedom to play around them. Not a hooting an hollering set, it’s about low key fire and i ...

Bird is the Worm (Dave Sumner)
Nice live set from a sax-guitar-bass-drums quartet. Zilber’s effusive attitude on sax matches well with Stowell’s tastefulness on guitar. Plenty to like on this straight-ahead modern jazz session. ...

All About Jazz (Dan McClenaghan)
4-STARS - Part of the appeal of the teaming of guitarist John Stowell with various "post Coltrane" saxophonists is the cool/hot dynamic. Stowell is the guy with a Zen restraint, the cool guy, his chords sometimes sounding as if they are ringing from frozen stalactite filaments in ice caves. Saxophonists? Some blow cool - those of the Lester Young ...

Downbeat (Bill Milkowski)
4-STARS The potent partnership of guitarist John Stowell and saxophonist Michael Zilber plays out on this highly interactive and adventurous set recorded before a live audience at the California Jazz Conservatory in Berkeley. Fueled by the remarkably empathetic Bay Area rhythm tandem of bassist John Shifflet and drummer Jason Lewis, Stowell and Zi ...

Jazz Weekly (George W. Harris)
Cool toned guitarist John Stowell teams up with saxist Michael Zilber and fronts a quartet along with John Shifflett/b and Jason Lewis/dr for a sophisticated set caught at the California Jazz Conservatory in Berkeley, CA back in 2012. Except for the free form and flighty duet between the two on the take of "My Funny Valentine" the band sticks to so ...

Ancient Victorys (Chris Lunn)
Stowell's inventive, warm approach to the guitar with a delicate touch meets Zilber, whit his big saxophone sound and edgy intensity. They have found a musical vocabulary across the past decade in duo, trio and quartet formats. This is their second quartet undertaking and was recorded live at the California Jazz Conservatory in Berkeley, Californi ...

Jazz Society of Oregon (Tree Palmedo)
This live meeting of two West-Coast powerhouses succeeds precisely because it's not the kind of combustible collision that many all-star collaborations can become. You can probably thank guitarist John Stowell for that: he's got chops for days, but actively avoids setting fires. Instead, he sits back and plays only the right things. The answer also ...

JazzTimes (Mike Joyce)
Anyone who has enjoyed previous collaborations by guitarist John Stowell and saxophonist Michael Zilber will be delighted to discover that nothing gets lost in the transition from studio to stage on this 2012 concert recording. It's an intimate quartet affair, marked by the kind of soulful, instinctual interplay that fans have come to expect. In ...

Cadence (Jason Bivins)
Live Beauty is filled with fine, probing modern mainstream that has a wide rhythmic range of reference but a lyrical heart. From instrumentation to idiom, it's indebted to sessions from the likes of Abercrombie/Surman and Scofield/Lovano, two key points of influence that shouldn't require any positive elaboration. Stowell is based in Portland, and ...

Improvijazzation Nation (Rotcod Zzaj)
…and surely here there is beauty! I've been listening to John's wonderful guitar ever since I moved to the Pacific Northwest (way back in 1980), but this is the first time I've reviewed an album with his playing on it. The excellent opener, "In The Park", brings back mem'ries of some of the great work John did with bassist David Friesen, but Mi ...

Louisville Music News (Martin Z. Kasdan Jr.)
Guitarist John Stowell was a regular visitor to Louisville during the Bellarmine Jazz Guitar Festivals (RIP). Best known for his quietly elegant work, he is, in his own words, "playing with more energy" here with his friend, saxophonist Michael Zilber. They're joined by bassist John Shifflett and drummer Jason Lewis for just over an hour's wort ...

Oregon Jazz Scene (George Fendel)
The gifted Portland guitarist John Stowell manages to get a record or two per year out there for his loyal listeners to enjoy. This time it is saxman Michael Zilber, who joins Stowell and the quartet before a live audience in Berkeley, California. Stowell and Zilber communicate effortlessly on six originals of varying moods and tempos. There is als ...